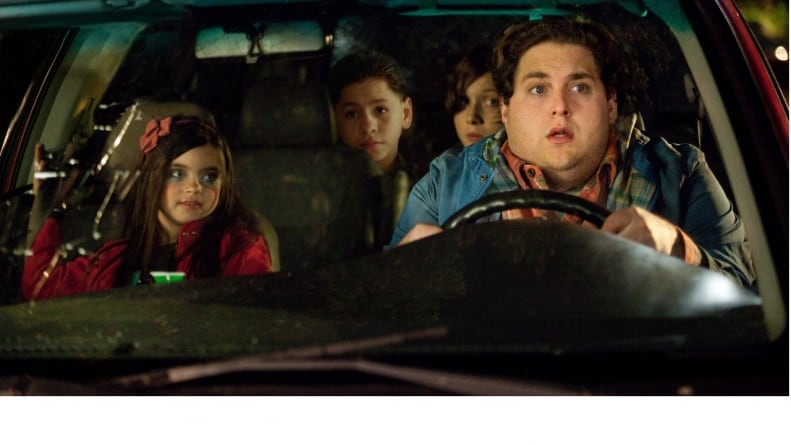 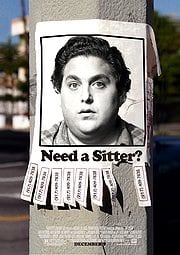 The spate of recent man-child comedies has drawn much criticism, most of it welcome, but like it or not the man-child embodies something unavoidable about our culture today. On the one hand, these films offer up fantasies constructed around relatively privileged straight, white males, whose central position in American society is unjustly guaranteed, so you have to ask what purpose these films serve other than perpetuating this self-centeredness. On the other hand, to ask of the man-child to quit stalling, pick a direction in life and “man up” is to ask him to conform to the adult roles that society–the corrupt, morally and culturally bankrupt society you were just railing against–has laid out for him, a rather hopeless dead end. David Gordon Green’s The Sitter features another quintessential man-child, but his film makes clear the meaning and purpose of this period of social gestation.

As we are swiftly introduced to the film’s main characters, along with its central premise and themes, we soon realize that there is something topsy-turvy about them. The adults are youthful, immature and even childish, while the children have been thrust too quickly into an adult world, each acting much older than his or her age. Preteen daughter Blithe (Landry Bender) wears too much makeup and worships celebrities, 13-year-old Slater (Max Records) takes medication for anxiety and adopted Rodrigo (Kevin Hernandez) is treated like a foreigner and prisoner despite the family’s liberal veneer of P.C. inclusiveness. Noah (Jonah Hill), the twentysomething man-child who must babysit the three kids so his mom can go on a date engineered by the kids’ parents, is the liminal figure trapped between these two worlds, youth and adulthood.

Reluctant to babysit, Noah takes the kids on a trip to Manhattan to meet with his sort-of girlfriend, who tempts him with the possibility of sex. It’s an absurdly self-centered decision, of course, but the humor is in how the experience is more traumatizing to Noah than anyone else. The Sitter follows a classic formula: pursue a simple and straightforward goal, but around every corner is one in a series of wildly near-catastrophic events, frequently life-threatening, that pushes the protagonist beyond his limits, changing him. At its most darkly absurd, this is the basic structure underlying Martin Scorsese’s After Hours, a clear influence on Green’s film. The effect here is to make everything and everyone seem potentially strange and threatening, turning upside down established values and suggesting that anything could happen next. It’s a clever setup because it mirrors the young, straight white male’s view of the social Other, but Green never lets Noah settle into complacency.

In fact, The Sitter reveals the primary rationale for the man-child’s delaying of maturity: by prolonging that period between adolescence and adulthood, the man-child essentially opts out of the unsuitable adult roles inherited from his parents’ generation until a suitable alternative is found. Like the punk and later slacker, two dominant American counter-cultural models of the last few decades, the man-child rejects conformity not out of laziness or infantile rebellion but out of dissatisfaction with the roles available. In fact, there hasn’t been a recent Hollywood comedy that so scathingly indicts the generation of Noah’s parents for its failures, a role model-less generation that has largely failed to raise their children or even simply be decent to one another. Both Noah’s father and the father of the kids he babysits have carried on affairs that left scars on their children, and to that end The Sitter rejects a conservative portrayal of kids as monstrous roaming ids, instead directing an interrogative lens at the parents who raised them.

Noah does finally “man up” by learning to care for the kids: if their parents won’t make them feel loved, who else will? In the film’s best sequence, Noah learns a secret that’s been torturing Slater while the four of them are riding on the subway. The revelation, barely hinted at before, is communicated solely through a series of shots that hinge on the cinematic technique of eyeline matches, a graceful moment of pure cinema that goes above and beyond the standard of sophistication required by the genre. What’s limiting about the man-child figure, and what draws ire from critics, is his tendency to lapse into complete solipsism, but in Green’s absurdist vision, where everyone potentially embodies the frightening Other, Noah’s liminality, his existing without any stable identity, ensures that his own self-centeredness becomes punctured. The inevitable heart-to-heart between Noah and Slater is sweet without being cloying: we feel that Noah truly recognizes the solidarity between them, the shared sense of having been failed by the previous generation. After all, it’s hard to remain self-centered when you don’t even know who you are. You may not be able to choose your parents–and you certainly don’t want to become like them–but you can choose what kind of adult you become. It’d smack of more white male privilege for the film to dwell on this too much if it didn’t focus so perceptively on the universal confusion of youth, of navigating a mostly indifferent world on the path toward adulthood. The Sitter’s frequent moments of undiluted sadness earn it the right to argue for postponing maturity when, all around, every potential adult role model is just a big baby.