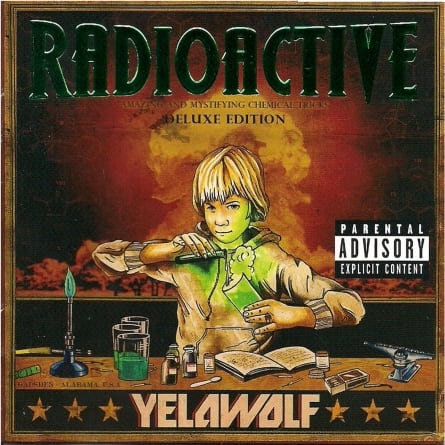 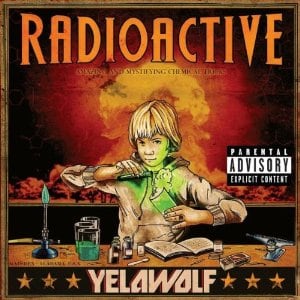 It’s rare these days that an emerging rapper’s main selling point is his actual rapping, but for recent Shady signee Yelawolf, that’s exactly what the word’s been. While he is a self-professed “hick” and an unapologetic diehard hip-hop fan, both promotion and critical acclaim surrounding him has been championing his arsenal of flows, utility closet of cadences and wardrobe of words with which he’s been turning in show-stopping performance after show-stopping performance. Recently signed by Eminem to his Shady imprint, Yelawolf makes his major label debut with Radioactive, an album whose chutzpah is woefully cramped by compromise.

Things start promisingly enough with a three minute introduction of rhyming without a chorus, immediately focusing on the shock-and-awe of Yela’s incredible rapping ability. After this we have all the makings of an album of the year. No rap artist on a major label has sounded as hungry to make an excellent rap song as Yelawolf does here, eviscerating every verse without forcing his style to become overbearing and override the implicit quality of a song. He isn’t just making sure he turns in solid verse; rather, Yela understands great rap songwriting to know when to let the track breathe and ensure the early overall quality. Along with a murky, crunching Southern backdrop, he surrounds himself with some of the genre’s best and more than holds his own with the likes of Mystikal, Gangsta Boo and Eminem, the latter turning in his absolute single best verse since returning to rap three years ago.

But it’s the voicemail skit immediately following Eminem’s appearance where things go awry. While everything up to this point had demonstrated the best results of applying a major label’s resources to a respected independent artist’s vision, Radioactive derails quickly as our poor protagonist sounds forced into making a Southern version of Eminem’s Recovery. While Yela’s verses remain as staccato as they are substantial, the rowdy call-and-response hooks are replaced by the same syrupy pop ballads that make Em’s recent serious turn so bland. It’s understandable and a reasonable concession that Interscope would want one or two love songs to somewhat emulate Em’s Grammy and chart success, but the half dozen here are all exceptionally forced. The worst of which, “Radio,” ruins the most poignant how-we-look-at-popular-music-changing song from an artist of any genre this year with an obnoxiously unnecessary, shoehorned interpolation of the Buggles’ “Video Killed the Radio Star.”

Still, there are more than enough great moments on Radioactive to warrant a recommendation. “Everything I Love the Most” best matches the album’s catchy radio superstar aspirations with an emphasis on Yelawolf’s persona and strengths. “Slumerican Shitizen” teams up Yela with a fired up Killer Mike who’s just as pissed off and pointed as we like him (rhyming in the same 6/8 flow that first wowed us on Outkast’s “The Whole World”). The closer (not including the four tracks on the “deluxe edition,” all of which are non-essential) “The Last Song” is a vulnerable personal reflection that gives the project a sense of closure. Radioactive is a race with hurdles and Yelawolf is primarily a sprint runner. While he does fall a few times when forced to run in lanes he shouldn’t be in, he still finishes strong.

Chaz Kangas is a walking Wikipedia, a World Record-holding rap artist and proud writer for Spectrum Culture. When he's not captivating audiences with his critically acclaimed approach to Hip-Hop, he's covering music, film and pop culture's highbrow and low-brow, putting them together for an entertaining unibrow and bringing them to your computer with a smile. He's guest-lectured at Fairfield University and has written for the New York Times, Complex and LA Weekly. He'll also freestyle for you about anything at the drop of a dime, with it yet to be determined what he'll do for a quarter.