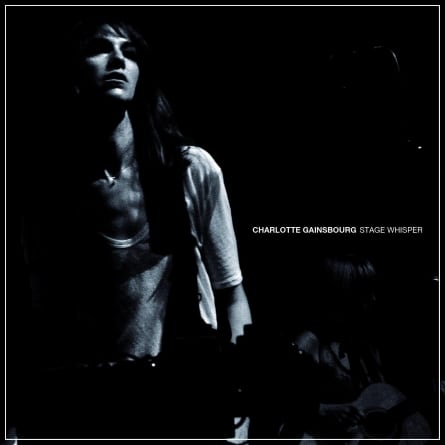 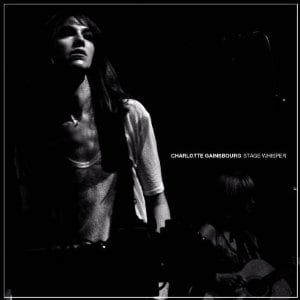 Despite being out of the public eye for some time (at least when it came to music), Charlotte Gainsbourg’s LP IRM (released in late 2009 across most of Europe and in early 2010 in the U.S.) instantly established her as a unique and accomplished voice in the indie universe who was ready to take on the overbearing shadow of her last name. Teaming up with Beck turned out to be a perfect combination for both parties. Beck was able to work in a strictly production/writing environment, free of the expectations of releasing a work under his name, while Gainsbourg took the collaboration as opportunity to inject the lyrics with different shades of her personality. While we wait to see how she follows up her breakout record, Elektra has given us Stage Whisper, a two-disc collection of live and unreleased studio tracks.

For those who were won over by IRM, Stage Whisper’s first disc is a nice, concise complement to that record. On “All the Rain,” her hushed vocals gently brush up against heavy bass drums and a varying parade of percussive inflections. “White Telephone” and “Out of Touch” are similar ballads, presenting Gainsbourg’s vocals as the lynchpin of the tracks. And though she can certainly hold a song, at many times sounding like the late Trish Keenan, it’s the tracks that lean towards the experimental that truly shine.

“Paradisco” is exactly what its title suggests: a slice of European-tinged dance-pop. Over top of a funky bass line and pounding processed drums, Gainsbourg elevates her vocals above her normal tone, summoning a slight falsetto. It’s a seductive, danceable, catchy tune that easily competes with some of the best work on IRM. “Terrible Angels” is Blondie via an industrial beat, which distorts Gainsbourg’s vocals alongside a fuzzy riff and handclaps. Just as with IRM, the success of this first disc lies in the fact that she presents a creative vision that pulls from a variety of influences and manages to sew them together in compelling ways. The fusion of disco, euro-pop and punk never feels forced, but rather acts as a natural avenue for her kaleidoscopic vision.

Though the unreleased material will be worth the price of admission for many, the second disc of live tracks is inconsequential and often underwhelming. The live setting and host of instruments overpower Gainsbourg. Frankly, she doesn’t have the pipes to fill out the arrangement. The live cut of “Heaven Can Wait” takes away all the punch of the original, revealing it to be a rather generic pop song. On “IRM,” the personal, moving title track of her earlier release, the strange sounds meant to mimic that of an MRI machine again push to the front of the arrangement and therefore put the vocals in the background. While the studio version was affecting and set the tone for the entire record, this live take feels stale and empty. Her take on Bob Dylan’s “Just Like a Woman,” which she originally did for the I’m Not There soundtrack, is a pleasant change of pace – the more nuanced, acoustic approach allowing her to be the centerpiece that she can be – on an otherwise scattered live disc.

Like so many albums that collect a potpourri of unorganized material, Stage Whisper comes across as flat and void of the pulse that made IRM and 5:55 such immersive records. There are a few tracks here that are a nice reminder that Gainsbourg is still an artist with a focused and ambitious creative vision. Until we hear her next LP, though, this assortment of live and unreleased material isn’t going to do much to satisfy anyone looking for some hidden gems.