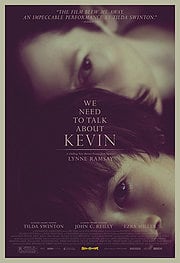 [xrr rating=1.75.5/5]Lynne Ramsay’s We Need to Talk About Kevin opens in a sea of red, a monochromatic palette that it never attempts to emerge from, resulting in a brutally assaultive film with no real suggestion of depth. Telling a mostly linear story immersed in a crowded stew of flashbacks, splashy fugues and ham-fisted symbolism, it examines the interplay between two very different characters: one a carefully sketched, long-suffering human being, the other a totally flat personification of evil.

The latter is Kevin (Ezra Miller), the monstrous son of Eva Khatchadourian (Tilda Swinton), who caps off a childhood full of blank nihilism and casualty cruelty by massacring classmates with a bow and arrow. Kevin is the black hole at the center of this film, the sucking void that draws in everything else. Ramsay, at least perfunctorily, is trying to tell the realistic story of a troubled woman, how she deals with such a burden, first persecuted by an uncontrollable child, then blamed for his hideous actions. But the two sides of this conflict butt up against each other so roughly that the whole thing becomes ridiculous.

There’s no effort to explain Kevin as a real person, no attempt made to grant him any shading or humanity. This leaves We Need to Talk About Kevin as a kind of high-minded analogue to The Omen, a film Ramsey alludes to with Kevin’s black hair and devious eyes. It also means that, for all her effort and skill, Swinton is utterly wasted opposite such an elemental force. It doesn’t help that she spends most of the film’s present-day scenes engaged in a giant act of symbolic self-repair, endlessly scrubbing at a swath of red paint, splashed across the front of her house. Ramsay’s directorial style has never been subtle, but the extent of her blatancy wasn’t nearly as apparent in the quieter, gentler milieu of dark Scotland-set films like Ratcatcher and Morvern Callar. With a larger budget and a broader canvas, she unleashes a host of negative impulses, leaving the film awash in loud imagery and horror-movie style jump scares.

This bludgeoning style only amplifies the movie’s other problems. It has a clear-cut ending, and a progressive, if repetitive, arc to its present-day scenes, but the flashbacks charting Kevin’s development are ceaselessly repetitive, mostly because the character doesn’t develop at all. He is so malicious, even as a baby, that it’s hard to believe that Eva’s husband (John C. Reilly, wandering in every so often) wouldn’t figure out something was wrong, or that a toddler would have the capacity to be falsely sunny to one parent and consistently malicious to the other. The final result recalls the “Living Doll” episode of “The Twilight Zone,” with future “Kojak” star Telly Savalas looking increasingly crazy as he wages war with his daughter’s demonic doll which returns to peaceful silence when anyone else is around. Swinton is more of an actor than Savalas, but her feature-length showdown with what’s ostensibly an inanimate object feels just as silly, the flimsy core of this overblown film.