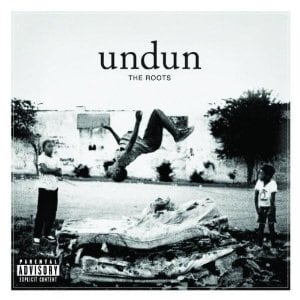 There was some understandable fretting a couple years ago when the Roots unexpectedly agreed to become the house band for the new “Late Night with Jimmy Fallon” program. It seemed that the band was hardly looking to settle down at that point, having had recent critical success with dark, angry albums such as Game Theory and Rising Down. Surely taking a post playing bumper music for a nightly talk show was going to cut into their ability to develop new music releases, seeping the energy needed to keep crafting challenging original works. Instead, they’re beginning to present an argument for the value of having a nightly gig to keep creative ambitions boiling. In the past 18 months, they’ve released the acclaimed studio album How I Got Over, full-fledged collaborations with John Legend and Betty Wright and now the stellar Undun which may be their most ambitious work to date. It’s certainly a late-charging contender to be considered among the best albums of the year.

Clocking in at a pleasingly lean length of just under 40 minutes, Undun is a concept album, that always questionable remnant of 1970s rock excess, when musicians strained to add novelistic narrative to their albums to impose an air of added legitimacy. In the case of this release, the songs hold loosely together as the story of a man named Redford Stephens. He’s born into a miserable life and proceeds as hope is worn away like a blade held against a spinning stone without relief. As the song “Make My” notes, “In the world of night terrors/ It’s hard to dream.” Like the best concept albums, it’s not the details of the story that matter, but the unity of the tone, the coherence of the vision. Undun acknowledges the built-in fatalism of modern life without romanticizing or even raging against it. The album is a dispatch, not a manifesto.

It’s also an album marked by the sort of elegant contrasts that have marked the music of the Roots from the very beginning. “Kool On” is built on a looped sample culled from the 1973 self-titled debut album from soul singer D.J. Rogers, the sweetness of his voice sparking against the rapped lyrics over top of the gentle lope of the song. When guest Truck North snarls, “Yeah outside where the killers and dealers swarm/ And inside they dressed up like it’s a telethon/ Black tie affair but they holding heavy arms/ Straight cash with a stash in the cummerbund,” the whole thing sounds like honest testimony from a street corner as music trills from a battered old radio that’s taken up permanent residence on a cracked stoop. It’s part of the inescapable collision of words that’s laced throughout the entire album. Moments of clarity don’t make the world a better place; they just allow for a clearer view of darkening clouds.

“Tip the Scale (My Way)” essentially crystallizes the album’s thesis of wounded possibility as Dice Raw sings, “Some think life is a living hell/ Some live life just living well/ I live life tryna tip the scale/ My Way, my way” on the chorus, giving way to Black Thought’s grim rap about a time and place defined by “soldiers of the streets with 8th grade diplomas.” Striving is fine, but too much of the life of someone like Redford Stephens is locked into place. Black Thought continues, “Look, let he without sin live without sin/ Until then, I’ll be doing dirty jobs like swamp men.”

The album closes with a terrifically inventive four-song suite that tips its hat to the song that was at least partial inspiration for the album and gave the lead character his name. Sufjan Stevens plays his song “Redford (For Yia-Yia & Pappou)” (from the album Michigan) quietly on piano, which gives way to a string quartet version of the piece (retitled “Possibility”) and then a spectacularly cacophonous avant-garde jazz version (“Will to Power”). Then comes “Finality,” a brief but powerful orchestral piece that ends the album with the quiet menace of a low note on a piano held until it slowly tremors away like a dissipating dark cloud. Like the rest of the album, it represents the Roots exploring the possibilities before them, blessed with a latitude that eludes the character they’ve created for the work. The band may have a regular paycheck that gives them the enticing option of growing complacent. Undun is a scintillating argument that they’re never likely to opt for that sorry route.

The Roots feat Phonte & Dice Raw – One Time by TheWellVersed