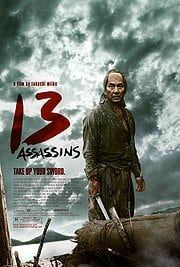 Way out west, Takashi Miike is a symbol of Japanese perversion: that crazy director who made a movie about a girl with piano wire who keeps grown men tied up in burlap sacks and feeds them vomit. In Japan, he’s more widely recognized as the man behind kids’ movie sensation Zebraman and a key figure in the J-horror scene. But after this year, Miike might finally get his due as a director who may be eclectic as all fuck but nonetheless possesses the singular vision and impeccable eye of the auteur, and that will be thanks to 13 Assassins.

If there has been one trait that has defined Miike’s work, it’s his passion for exploring as many genres as possible and, to that end, it’s easy to simplify 13 Assassins as his samurai film. While it’s true that 13 Assassins owes more to Kurosawa than Oshima, 13 Assassins‘ closest peer is Beat Takeshi’s modern remake of Zatōichi, which similarly merged gorgeously natural cinematography with balletic violence and cruel humor, and was likewise helmed by a director who has been difficult to peg.

A bleak story about the end of the samurai era and the cruelty of the elite, 13 Assassins doesn’t shy away from violence but it’s far more restrained and character-driven than you might expect. Miike focuses on the incredible performances of his actors, including Imamura veteran Kōji Yakusho, and the fading beauty of the Japanese countryside as the modern era encroaches, granting the film a structure and not unlike an Altman-Malick hybrid. But typical Miike touches remain, including hyper-stylized death scenes and characters who don’t quite fit in with reality, like the final assassin, who may or may not be a folkloric demon.

It all adds up to a film unlike any other this year, a film that may finally force audiences to view Miike as a serious talent and which may help usher in a golden age of Japanese film exports. But even if it doesn’t, it will always have a place as one of Miike’s greatest achievements. – Nick Hanover

Documentaries on bands with tumultuous pasts can be a risky proposition. On one hand, you can capture Metallica crying like babies in Some Kind of Monster or you can get two hours of Robbie Robertson preening in eyeliner in The Last Waltz. Fortunately, Beats, Rhymes & Life: The Travels of a Tribe Called Quest finds itself firmly in the former category, catching the titular group in amazing candidness. Directed by actor/longtime fan Michael Rapaport, the documentary works both as a history of and primer for Tribe’s astonishingly rich career, featuring little seen footage of the band in their heyday and a carefully chosen soundtrack that utilizes the best of one of hip hop’s greatest and most unique groups.

More than that, Beats, Rhymes & Life reveals the stresses and still raw emotions that led to the implosion of the group in 1998. Given incredible access to the band members, Rapaport and his camera follow Q-Tip, Phife Dawg, Ali Shaheed Muhammad and Jarobi White as they prepare for a 2008 reunion tour, getting the story direct from the source. All the tensions, jealousies, slights, affectations and admiration the quartet has for one another is captured on screen, from Q-Tip’s boyish enthusiasm to break down a sampled beat a decade old to Phife Dawg’s still simmering anger at his perception of being relegated to a sideman. The tale of the Tribe is a wholly remarkable story by any stretch of the imagination, and more so for being told by the legends themselves. It’s a fantastic movie, whether you’re a fan or just stumbling onto the band. And don’t worry, if you’re the latter, you’ll be a fan by the time the film’s over. – Nathan Kamal 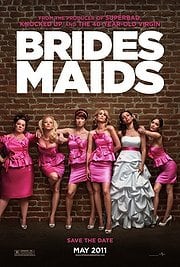 Way too many romcoms these days are about weddings. I’m not sure why that is – maybe the demographic these films are baiting actually do carry some sort of subconscious tension about their own “perfect days” going tits-up (sometimes literally, depending on the film’s rating). Or, more likely, asshole studio execs think this is what women want in their comedy films: movies about dresses and boys! Maybe that’s why Kristen Wiig, the lady on “Saturday Night Live” who does the funny voices, co-wrote and starred in Bridesmaids, the surprisingly awesome cousin of the wedding film – to smuggle a really great comedy where many audiences wouldn’t expect it. On paper, Bridesmaids is most definitely a wedding comedy. Our perpetually single heroine has to be the maid of honor at her bestie’s wedding and everything goes wrong as she finds herself competing with someone more qualified to handle the proceedings, all while the rest of the bridal party yuks it up in a thick haze of drugs-and-fucking raunch. Someone shits in a sink! “It’s like 27 Dresses meets The Hangover!” Help me tie this noose.

But, like I said, smuggling. It’s a Judd Apatow production and directed by “Freaks and Geeks” creator Paul Feig, so that should indicate a quality viewing experience for cinematic comedy nerds. Moreover, Wiig and co-writer Annie Mumulo craft a screenplay with some serious pathos, and I don’t mean some forced dying relative or cancer subplot. Wiig’s character is neither a bedpan for the ailing comedy gods to shit on, nor is she a bland, Heiglian blank slate for a brain dead audience to project themselves upon. Instead, she’s a real character, a social fuckup who acts like a human being throughout the movie; she’s emotional, competitive and sometimes a little selfish. She’s hard to like, but easy to identify with.

If that weren’t enough, Wiig and Mumulo fill the film with awesome characters brought to life by some amazing comic talent including newfound powerhouse Melissa McCarthy as this year’s Zach Galifianakis without the mental retardation. Also, Jon Hamm plays a cartoonish dick of a not-boyfriend and Tim Heidecker plays his strangest part yet: a completely straight role as the groom. That alone gives Bridesmaids a pretty high rank as one of the best films of the year. – Danny Djeljosevic 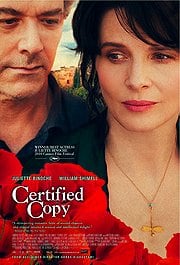 There’s probably some way to connect the circular, recurring themes of Abbas Kiarostami’s Certified Copy, with its dizzying conversations and brides multiplying like fallen leaves, to the tradition of end-of-the-year list-making, a practice that seems nearly as compulsory as human reproduction. But it’s probably better just to focus on the film itself. Certified may not be Kiarostami’s best film, although it’s certainly one of the frontrunners in a crowded field, but it’s definitely his, and this year’s most entertaining, emotionally affecting and complex puzzle. The relationship between the never-named She (Juliette Binoche) and James Miller (William Shimell), who may be former lovers reunited or inspired strangers masquerading as such, is never explained, and like so many of cinema’s finest mysteries, it doesn’t need to be.
Instead, this seed of mystery acts as the impetus for a roving, rolling conversation which draws comparisons to Linklater’s Sunrise/Sunset movies and other films defined by a tumbling progression of language. The end result is both a fascinating study of the various ways in which two ambiguous characters interact – fighting, uniting and struggling to relate – but also an incisive examination of copies and genuine articles, the way the two states require and thrive off each other. For professional sourpusses like T.S. Eliot, the concept that human development was just an endless cycle of copies copying copies spoke of attenuation and rot. For Kiarostami, it’s a testament to human persistence, the indomitable urge to keep trying, even if we never get it right. – Jesse Cataldo 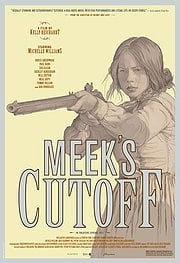 For a film that has been described by so many critics as “minimalist,” there sure is a lot going on in Meek’s Cutoff. Kelly Reichardt, director of such past indie favorites as Wendy and Lucy and Old Joy, applies her “neo-neo realist” style to the American western. We follow three families on a wagon train across the Oregon High Desert. As the journey progresses, the travelers begin to realize that they are lost and their guide, Stephen Meek (Bruce Greenwood), might have no clue where he is going.

The plot, though, is secondary to the movie’s eerily realistic depiction of the desolate setting. In contrast to the classic films of John Ford and Howard Hawks, which typically paint the American West as a sweeping landscape upon which all things are possible, Reichardt depicts the land as oppressive, befuddling and dangerous. The frame is often full of sand, the scorching sun and the exacerbated faces of the weary travelers (Michelle Williams, Paul Dano and Will Patton and Greenwood are the standouts in the cast). Rarely has the experience of moving westward been depicted on celluloid with as much visceral immediacy.

There’s more to Meek’s Cutoff than the sum of its beautiful, bleak images. The film has been described as a “feminist western” because Reichardt acutely observes the subservient position of the women in the party. Many have read the film as an allegory about contemporary American political issues, including the wars in Iraq and Afghanistan. The plot device of travelers on a journey to nowhere invokes a Waiting for Godot-like absurdism in exploring fundamental questions about human existence. If the ending feels a bit too “on the nose,” it’s because the film that preceded it was so subtle, so deceptively simple, yet so beautifully complex. – Jake Adams