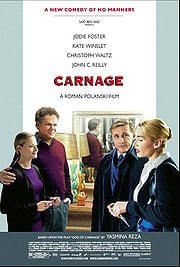 [xrr rating=4.0/5]After another critical comeback of sorts with The Ghost Writer, Roman Polanski has made a decidedly smaller picture, adapting Yasmina Reza’s Tony-winning play God of Carnage for the screen, trimming this comedy of ill manners’ title to simply Carnage. But don’t let its short running time fool you, Carnage is a deep meditation on the human condition and the fine line that separates social convention from simple tribalism.

After a wordless introduction where a playground fight leaves one child with a few busted teeth and nerve damage, Polanski then takes us (and leaves us for almost the entirety of the film) to a bourgeois Brooklyn apartment owned by Penelope (Jodie Foster) and Michael (John C. Reilly), the parents of the injured boy. In a civilized summit of sorts, the parents of the attacker, Alan (Christoph Waltz) and Nancy (Kate Winslet) have come to make amends, but it doesn’t take long for Polanski and Reza to reveal that this comfortable apartment is as much a milieu for warfare as the playground.

In the tradition of The Exterminating Angel and The Discreet Charm of the Bourgeoisie, Carnage probes the animalism lurking behind the social masks we have learned to erect. It doesn’t take long for the two couples to begin fighting, making it impossible for Alan and Nancy to simply leave the fucking apartment. Polanski draws all the comforts and conveniences of modern life into the fray: from an annoying cell phone to subtle differences between the different strata of being well-off. While Penelope, Nancy and Michael attempt, at first, to disguise their contempt for one another, lawyer Alan makes no effort to hide his disdain. This sets off hair-trigger Penelope, couched in her liberal ideology (she is working on a photo book on Darfur), setting into motion a downward-spiraling brawl where every object in the room can be used as a weapon, from flowers to doorknobs to that damned cell phone.

Co-written by Polanski and Reza, Carnage is all about the script and its actors. Funny, incisive and sharply observant, the film moves swiftly as it envelops class, gender roles, the drug industry and marriage. The four characters square off, allying with the most convenient partner at any given moment. So what is Polanski saying? That in this world it’s every man (or woman) for himself.

For the most part, the acting in Carnage is top-notch. Waltz and Winslet score big as the smarmy couple who come to do a half-assed penance while you can see Reilly barely able to contain his contempt for everyone else in the room. Unfortunately, Foster overdoes it at times as Penelope, easily the film’s least likable character. While the other three are complicit and recognize their scorn, Penelope is so couched in lefty ideals and being “right” she cannot admit to herself that she is just as guilty as the rest of them.

Carnage displays a sense of humor Polanski hasn’t trotted out since Bitter Moon (unless you consider The Ninth Gate tongue-in-cheek) and it serves him well. Boiled down, it is a comedy, but one with a bleak outlook. Surprising, creative and at times brutal, Carnage is not only Polanski’s best film since The Pianist, it is also one of the best films you will see this holiday season. Go with someone you love.