January 27, 2021
Home Film The Girl with the Dragon Tattoo 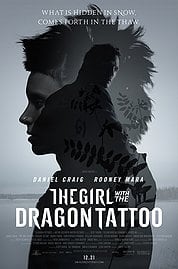 [xrr rating=4.75/5]We live in the Information Age, and David Fincher has become its prophet. Increasingly, his protagonists engage foremost in pursuing and processing information, but even before that, his stylistic signature displayed a hyperawareness of information, reveling in virtuoso techniques and trick shots that lay out data with extreme precision. Even a deceptively minor film like Panic Room is notable for how thoroughly it maps its primary location’s layout, using cameras that travel through the ventilation system or zoom in to the filament of a flashlight. But what truly distinguishes his films is the philosophical framework from which they are made: Fincher understands better than virtually any other filmmaker today the central tension of the Information Age, the way our constantly expanding body of information nonetheless fails to necessarily increase our knowledge of the world and of each other. This tension was masterfully explored in The Social Network, a film less about the internet than the way Facebook tapped into our preexisting drive to reduce people to collections of data, and no matter how much information we possess about a person, this will never be the same as knowing them.

Like 2007’s Zodiac, Fincher’s latest film The Girl with the Dragon Tattoo is about the search for a killer, but as one detective states, unsolved murder cases are really about “the soul of a policeman,” a statement that, if we understand “policeman” more generally as someone who gathers information, constitutes the essence of these two films. Throughout Dragon Tattoo, key moments or lines of dialogue are given a special weight, approximating the feel and flavor of revelation; as a filmmaker, Fincher is searching for that fine line between raw information and meaningful knowledge. In Zodiac, the mere identity of the killer was less important overall than the abyss of existential doubt that his murders opened up, threatening the sanity of those investigating the case. It was a film about how the immense violence of the 20th century eludes all human reason.

Dragon Tattoo shifts its focus from the crime more purely to the investigation itself. Moreover, this investigation is doubled: not only is Fincher testing the capacity to draw knowledge from fragments of information, he is also testing the limits of digital cinema to convey that knowledge. As D.N. Rodowick notes in The Virtual Life of Film, digital images fundamentally, ontologically differ from analog images: where the former are simply collections of data stored in binary code, the latter share some of the being of that which is photographed, leading André Bazin to famously compare a photograph to a fingerprint, a holy shroud, and a death mask. Throughout Dragon Tattoo, Fincher seeks to transcend the limitations of digital cinema, to go beyond a world figured as pure information and find something solid at its core. It is entirely appropriate, then, that the film’s most important clues come in analog forms – a notebook, a Bible, photographs – that are then digitized and manipulated, most stunningly in a series of photographs that pinpoint the precise instant terror seizes Harriet Vanger (Moa Garpendal) before her disappearance. This moment is not only a revelation of hidden knowledge, it is also a metaphor for digital cinema’s possible salvation from the realm of meaningless data.

Fincher wraps additional thematic strands around the film’s three intertwined storylines, representing past, present, and future. At the center is the mystery of Harriet’s disappearance, which haunts the family and is investigated by journalist Mikael Blomkvist (Daniel Craig). Solving this mystery unearths Europe’s decadent, corrupted past, from Nazism and religious fanaticism to violence against women. This inheritance colors our understanding of Europe’s present, embodied in the figure of corrupt industrialist Hans-Erik Wennerström (Ulf Friberg). Fincher regards information as the primary weapon of corporate crooks like Wennerström, whose crimes essentially involve “hiding” money, understood as mere data in a transnational financial system every bit as immaterial as digital cinema. Mikael is thwarted from proving Wennerström’s guilt because although he has the requisite information, his proof is denied legal legitimacy when he is convicted of libel (appropriately, the spreading of “false information”).

Fincher’s film points most interestingly to the future in its pairing of Mikael with Lisbeth Salander (Rooney Mara), a hacker who works as Mikael’s research assistant. Their relationship, a “partnership” par excellence, is notable for the way Fincher plays with gender, envisioning a hybrid solution completely absent in the 2009 Swedish version of Stieg Larsson’s novel (the original title of which is, interestingly, Men Who Hate Women). Most striking is the way Fincher so unneurotically feminizes Mikael, culminating in the film’s climactic sequence. Craig adeptly softens the edges of this character to prime him for a pairing with the commanding presence of Mara’s Lisbeth. Mara gives a masterful performance, moving with supreme authority and contorting her body into almost alien forms, but never once does her masculinization of Lisbeth deprive the character of sexuality, as has so often plagued Hollywood in the past.

Many critics have objected to the film’s notorious rape sequence, but Fincher uses this material to further his gender exploration. As Carol J. Clover has noted, such scenes allow the (male) spectator to assume a “‘feminine’ position” (just as Mara’s Lisbeth allows female spectators to assume a more dominant, “masculine” position through her performance). This is perhaps Fincher’s most visionary treatment of gender yet, hinted at in the film’s expressionistic opening credits sequence, which depicts the hybridization of a male and female figure. Against the plot’s pulpy engagement of gender-based violence, Fincher’s searches for a kind of gender and sexual symmetry, the union of a feminized man and a masculinized woman. But where Clover notes that this combination inevitably leads to violence within the horror genre, here Fincher legitimately makes the case for this hybrid. Fincher thus “investigates” Larsson’s novel, transmuting it into a glimpse of future gender politics. In this way, Fincher has crafted a film about the souls of those living in the Information Age, struggling to uncover real knowledge amidst the debris of data.