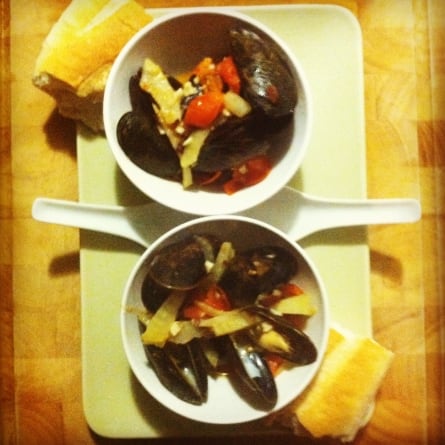 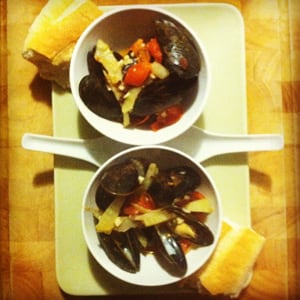 “I love everything about mussels cooked this way: steamed open with simple seasonings and served in a big bowl with good bread. There are so many layers to it.”

There is an intense satisfaction in executing a simple bowl of steamed mussels. One borne of cooking something that is often perceived as exotic in the home kitchen and pulling it off fairly effortlessly. Yes, that’s right, effortlessly. To wit, Keller’s approach to mussels is another example of his ability to demystify an ingredient normally reserved for the professional kitchen. The biggest takeaway that Keller has imparted to us through his cookbooks is to be not afraid of the ingredients that might seemingly be the provenance of the chef because it is only when you come to terms with those ingredients that you can become a well rounded cook.

That’s not to say that his recipes for mussels in Bouchon aren’t without their chefly leanings. The one I have replicated in our home kitchen the most, indeed the one that was my entry to cooking the tiny mollusk, calls for a simple array of white wine, butter, mustard and shallots. Here is where the chef thing comes into play: It also calls for a very generous amount of butter, no less than 24 cloves of preserved garlic (24!) and a pinch of saffron to be added when the broth is ready to steep. I have to confess, lord help me if the cookbook gods read this, that I have never added that amount of garlic to the recipe when doing it and it has still tasted divine. Garlic be damned, one of life’s great pleasures is stealing a kiss from my wife in the kitchen and there is a direct relationship between her willingness to do so and the amount of garlic being used in the kitchen.

The basic idea put forth by Keller here is to steam the mussels in an acidic broth, utilizing a few aromatics to flavor. The beauty of eating mussels for dinner is that the meal is fairly light, save for the whole baguette you’re going to consume against your will as you mop up the broth. My waistline can attest to that, as well as the fact that I should probably tone down the amount of butter in my life.

Following that, I adapted Keller’s technique the other night to minimize some of the artery clogging elements of the recipe, while emphasizing the acid and aromatic components. Butter gave way to olive oil, and the classic combination of the mustard, shallots and saffron was sacrificed for something more Mediterranean. Using cherry tomatoes for their acidity, and pairing them with thinly sliced fennel, garlic, olives and capers is something I’ve done for everything from a sauce for fresh pasta, a topping for fish cooked in parchment paper and garnish for grilled chicken. Drowning that collection in white wine and then steaming the mussels in the resulting broth was no less worthy a use.

(adapted from Bouchon by Thomas Keller)

Heat a large pot over medium heat and add the olive oil. Once it is hot, add the sliced fennel and sauté for 3 minutes until it begins to soften. Add the tomatoes and cook until they begin to soften and release their juices, about 4 minutes. Add the garlic and cook for 1-2 minutes, until the garlic becomes aromatic. Add the remaining ingredients except the mussels, and season with salt and pepper. Bring the wine to a boil and then remove from the heat and let the broth steep for at least 5 minutes or up to 4 hours. Once you are ready to cook the mussels, bring the broth to a simmer over high heat, add the mussels and cover the pot. The mussels are ready once they have opened, usually after 2-3 minutes. Serve immediately.