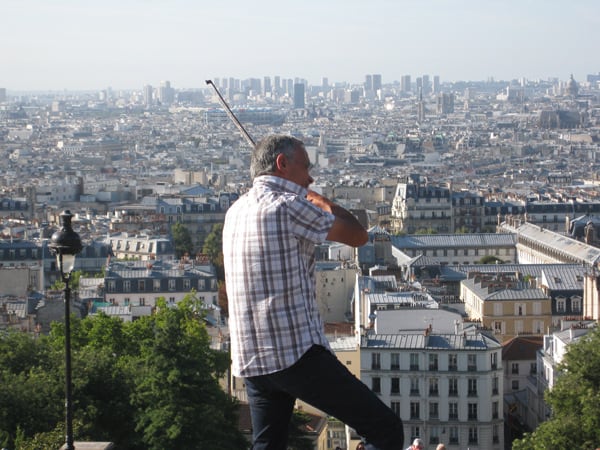 James Murphy, the brilliant sweatpants-clad schlub behind LCD Soundsystem, seemed an improbable frontman. But for 10 years, this producer and multi-instrumentalist planted himself behind the mic at LCD Soundsystem’s raucous live shows before he abruptly pulled the plug on the project in 2011 at the height of its success. “New York, I Love You but You’re Bringing Me Down” — tucked away as the final track of 2007’s sophomore album Sound of Silver — is far from Murphy’s most notable song, but with earnest vocals overlaid upon a murmur of somber piano chords that build to a cymbal-fueled crescendo, it may be his most genuine. Notorious for his cheeky skewering of the indie music scene, Murphy truly sounds pained by political efforts to whitewash away the grit and charm of his city, delivering lyrics as if from behind the raindrop-dotted window of a cab. After repeating the song’s title, he laments, “Like the death of the heart/ Jesus, where do I start/ But you’re still the one pool where I’d happily drown.” The Big Apple may no longer be the best city in Murphy’s eyes, but it’s the best we’ve got. – Josh Goller

The best song to reference Atlantic City wasn’t written by New Jersey’s favorite native son. That honor instead belongs to F.M. Cornog, whose “Atlantic City (Gonna Make a Million Tonight)” serves as the standout track from the unfairly overlooked The Gasoline Age. The lure of the gambling city comes into gradual focus as the song unfolds over nearly 10 minutes, its opening gentle guitar and keyboard arrangement eventually giving way to the sounds of a casino, as its narrator stakes his future on a long shot at the slot machines or card tables.

The song depicts Atlantic City in one of its quietest moments – maybe the sun’s just coming up or going down – as Cornog invokes compassion for his hard-life narrator by offering brief but telling biographical details. By the time the song ends, we’re left hoping the narrator’s claim that this is his lucky day is more than just bravado or delusion. – Eric Dennis

Though he was born in Nebraska and lived elsewhere for much of his life, Elliott Smith will be forever be associated with Portland, OR. It could be that the mournful, moody tone of his songs suits the legendary atmospheric gloom of the city; it could be that we’re proud of one of our most accomplished adopted songwriters. Early in his career, Smith wrote several songs centered around the city, most beautiful of which is the quiet, barbed “Alphabet Town.” Named for a neighborhood in the Northwest District, it’s an almost archetypal Smith song from one of his darkest albums, Elliott Smith. An acoustic guitar and a stark harmonica carry Smith’s whispering voice as he suggests a troubled love story between two confused people, the chorus of, “I’ll show you around/ This alphabet town,” sounding both sinister and tragic. It’s Smith at some of his simplest and most mysterious, a dark ode to a city that loved him. – Nathan Kamal

In its clearest, cleanest interpretation, PJ Harvey’s “You Said Something” (from the magnificent 2000 album Stories from the City, Stories from the Sea) is about two people coming together and the way single moments can reverberate endlessly. As with a lot of Harvey’s work, the smart, thoughtful, almost novelistic details give the song its impact and, for me, the track is as much about the city it takes place in as anything else. The song opens, “On a rooftop in Brooklyn/ One in the morning/ Watching the lights flash/ In Manhattan,” and I can practically feel the late night breeze high above the city. “I see the five bridges,” she continues, “The Empire State Building/ And you said something/ That I’ve never forgotten.” There’s nothing especially intricate or novel about the descriptions. It’s just a statement of time and place, but it merges with the gently swooping guitar lines to instill an elegant romanticism into New York City itself. The city isn’t a participant in the love affair, but it does emerge as an ideal matchmaker. Just as there’s inherent nostalgic beauty in the perfect murmured statement at the perfect time, sometimes there’s nothing more precious that a twinkling skyline dotted with cherished landmarks. – Dan Seeger

Writing a song about New York seems fairly simple when you get down to it. After all, there’s so much history and cultural significance to draw on that Ryan Adams and Frank Sinatra can turn out verses with relative ease, one imagines. But what if you grew up in the cold, culturally barren wasteland that is Winnipeg? How does one romanticize the relationship with a town generally accepted as a nice place, but not somewhere you want to stay for a long period of time? For the Weakerthans, the song-as-backhanded-compliment was the simplest and most endearing way to present the tediousness of life in their hometown. Over a simple, fingerpicked guitar, John Samson laments the mundane: gas prices are too high; the hockey team blows; you take the same route to your dollar store job every day. He caps it all off with, “I hate Winnipeg,” a nuanced refrain that doesn’t suggest hostility, but rather a comfortable, even gratifying exasperation; simple and strangely affecting. – Kyle Fowle