At this point, Samuel Fuller had yet to make a film about World War II. Well, unless you count his muddled enemy lines romance thriller/postwar occupation drama/Nuremberg trial documentary Verboten!, which I’m loath to consider. Even his first full-fledged WWII film, Merrill’s Marauders, focuses on the Burma campaign, which the writer/director didn’t serve in. It almost seems like Sam Fuller’s talking around the subject but considering how often his experience informs his filmmaking, he’s doing as good a job not talking about the war as Basil Fawlty.

Which isn’t actually true. Fuller had a World War II film based on his experiences in his pocket since the late ’50s; it was called The Big Red One he was trying to convince Warner Bros. to let him make it when he was offered Merrill’s Marauders. While he initially turned that project down, Warner President Jack Warner convinced Fuller that Marauders would be a “dry run” for the WWII movie he actually wanted to make. So he signed on to direct the film and write the script with producer Milton Sperling.

Knowing that a movie was made only to leverage a more desirable project doesn’t exactly fill a review with excitement, and some might point to that situation as reason why Merrill’s Marauders doesn’t leave as pleasurable a taste in one’s mouth as it should. While I’m the nature of being a glorified chore certainly doesn’t foster artistic genius, let’s not forget that the story is based on real human beings. In reality, Merrill’s Marauders were a unit that went deep behind enemy lines, carrying out missions against Japanese forces that outnumbered them. One member of this group wrote a book called The Marauders and that book was adapted into the movie in question. As a result, there’s a sense of devotion, of fidelity to the subjects of the film. Which isn’t to say that the film should be spitting on its soldiers, but as it’s the early ’60s and audiences still very clearly remember the war, there’s a sense of lionizing to the extent of overdoing it, possibly at the behest of the studio. We’re not immune – remember after 9/11 when every piece of popular entertainment had a goddamn American flag in the final frame? 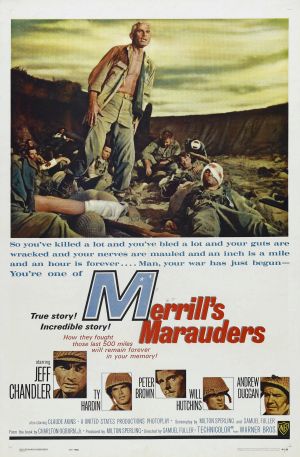 As for auteurish matters, Marauders is one of those films where you see the director’s hand and his trademarks, but it doesn’t quite sit as well as his prime material. Remember when the Coen Brothers made Intolerable Cruelty and The Ladykillers and both felt like the Coens made them on autopilot? For Sam Fuller, this means his trademark gritty, cameraman-on-the-ground style of filmmaking that puts you in the action as the camera sprints along with the troops, lens brushing against vegetation – combined with stock footage, of course. And like some of his earlier war films comes to mind), there are quick but vividly painted soldiers – all played by gravely TV actors under contract with Warner, all of whom look like they were shattered into a million pieces and hastily put back together. This time the requisite quirky soldier is a man in a straw hat who has a very special rapport with a horse, also wearing a straw hat.

There may be reasons for this “not quite Fuller” feeling, as well, considering Warner Bros. reportedly made some seriously objectionable cuts to the film. While the final production tries to appear triumphant about the experience, Fuller is a guy who knows his war, and seemed intent on actively and accurately portraying its effect on soldiers sweltering in the jungle, suffering delusions from starvation, disease and sleep deprivation as they carry out mission after mission. One key scene has the starving troops ordered to ignore a supply drop because the enemy will use it as a death trap for them. One hungry soldier sits back from the retreat and his final fate is swift and unceremonious, as if tossed down from an uncaring god. If it were a John Wayne movie, the Duke would have to look on and remark that G.I.s need to maintain his steely composure to survive in this hellhole, but Fuller’s soldier dies alone in a scene submitted without comment.

Merrill’s Marauders gets especially brutal in the film’s middle section and well into its third act, as the troops have been ground into nubs and every location is filled with bodies – after the battles, the dead lie in piles painting every hill, village and train station. The most dazzling scene in the entire film depicts a shootout with Japanese in a stone maze as Fuller and cinematographer William H. Clothier compose frame after gorgeous frame of soldiers shooting across the weird angles of these stone structures that serve equally as cover and confusion. But once you find out that the scene was originally intended to be one continuous take as the Americans kept accidentally shooting their fellow soldiers, it becomes clear how much better it could have been if left untouched.

It’s that agony, that brutality, that abject exhaustion that succeeds in Merrill’s Marauders, eventually taking its toll on the audience (I dare you to name any 98 minute film of quality that feels longer than this one), perfectly conveying the idea of doing something that makes you actively suffer but you can’t stop doing. Much of the prickliness feels sanded down compared to Fuller’s earlier efforts and a cinephile’s expectations are high, so in the end the film doesn’t quite hit as it should. If this were just some war flick playing on AMC on a Saturday afternoon in the mid ’90s (or on Turner Classic Movies at 4 A.M., in the year 2012), it’d probably be a cinematic sucker punch.

The changes that Warner Bros. made to Merrill’s Marauders were seemingly egregious enough to make the director fight the studio over the cuts. As a result, they refused to sign off on The Big Red One, making this whole “dry run” endeavor all for naught. Samuel Fuller eventually got to make his pet project, but it took him nearly 20 years to get it off the ground, and not before moving into stranger territory in a couple of the following films of the rest of the decade.