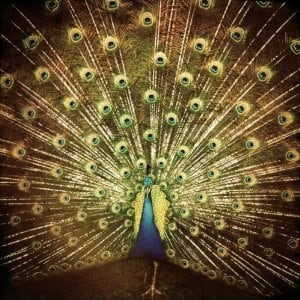 [xrr rating=2.0/5]Appropriately, there’s no better place to start when trying to discern where Ani Difranco currently stands artistically than the title cut to her latest album, ¿Which Side Are You On?. A reworking of the old protest song written by Florence Reece and strummed out by every folk singer worth his or her salt ever since, the track bobs along with both challenge and hopefulness, all backed up with music that offers a merging of old and new sensibilities. The banjo plucking of guest Pete Seeger (who arguably recorded the most famous version of the song) is met by a fierce clatter of sounds, including percussion and horns provided by the Roots of Music Marching Crusaders, who belong on every last recorded musical cry of inequity on the basis of their name alone. Difranco’s voice is crisp and clear and out in front, melodiously offering lines such as, “The road to ruin/ Is paved with patriarchy.” Like it or not, this is the poster girl with no poster, circa 2012, swinging her chords at the nebulous power structure with campfire songs that are just a little too jagged for sing-alongs.

In the past, Difranco could be fairly criticized for a prolific nature that seemed to indicate a certain lack of quality control. Counting the time between releases was best done in months, the way parents indicate the age of a toddler. At times, it seemed like every song that she scratched out was given a prime placement on a new album, regardless of whether it was fully formed and properly honed when the time came to lay down tracks. There’s no reason to suspect that’s the issue this time out. It’s been over three years since her previous studio album, the drab Red Letter Year in 2008, the longest gap for Difranco since her debut in 1990. That presumably gave her time to cull the very best material and make sure every song was fully field tested on various stages before the sort of adoring audiences she still commands.

Unfortunately, the resulting album is as haphazard and ill-formed as some of the older efforts that bore indications of being cobbled together too quickly. Difranco’s pointed viewpoints remain, but there’s a dismaying lack of passion on much of the record. The songs would sound like rough drafts if they weren’t so slicked up by the production, co-credited to Difranco and her longtime collaborator (and current husband) Mike Napolitano. Her greatest strength has long been the intricacy of her songs, both in the deftly inventive guitar lines and the evocative lyrics. Maybe it’s too much to expect that to continue with unerring consistency (not counting collaborations, live sets and collections, this is Difranco’s 17th album), but it’s still dismaying to hear lyrics as trite as those in “Albacore”: “I’m no blushing girl/ No innocent dove/ It took me a long time to find love/ But now I have no doubt/ And I never will/ That I am meant to be/ Loving you.” I don’t need her to continue to be the angry firebrand raging against the world, but she was once a songwriter who valued complexity above all else in her lyrical evaluations of the world. Can’t she find something more profound than that to say about being in love?

Much of the album has an inadvertent disconnect between whatever uneasiness she’s feeling with the world and the best way to convey it. Her guitar playing has abated in its fierceness (perhaps partially a result of the Carpal Tunnel Syndrome diagnosis she developed after years of relentless touring) and she instead bolsters the work with a snaky, jazz-inflected backing that sometimes cools the songs further. It cuts against the bluntness of the lyrics, sometimes in ways that are fairly intriguing. In the song “Amendment,” she’s as direct and plainspoken as she’s even been: “And if you don’t like abortion/ Don’t have an abortion!/ And teach your children/ How they can avoid them/ But don’t treat all women/ Like they are your children.” I’m not actually sure if I think the song is especially good – though I’m sure it plays great at a rally – but it definitely got my attention.

I don’t think Difranco has any doubt as to which side she’s on, but there is some level of confusion evident on her latest album. For a performer whose career has been largely defined by firmly stating her place in the world, there’s a softness – almost a play-acting – to the songs she’s creating now. She’s clearly grown up a lot since she was barnstorming coffeehouses across the nation. Now she just needs to figure out how to coax her songwriting into achieving the same level of graceful maturity.