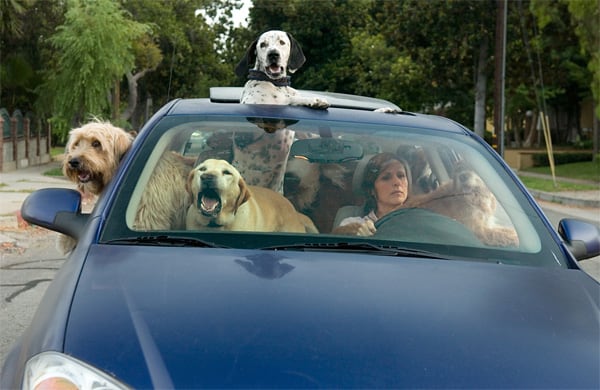 On the surface, I can understand why Year of the Dog didn’t attract a wide audience; viewers expecting another wacky performance from the actress best known for the armpit-sniffing Mary Katherine Gallagher character instead got ─ within the first 10 minutes ─ a dead dog and a visual of how veiny Molly Shannon’s scrunched forehead grows when she uncontrollably bawls. Not exactly a knee-slapper.

The film grossed a paltry $1.5 million from its limited theatrical screenings and the DVD was quickly relegated to bargain bins. Maddeningly, mindless rom-coms, bromances, and dick joke vehicles continuously strike box office gold while more subtle forms of comedy, and those that incorporate dramatic elements, rarely receive their due. Year of the Dog fits into the latter. In screenwriter Mike White’s directorial debut, the guy responsible for penning scripts reliant on the porcine physical comedy of Jack Black (Nacho Libre and School of Rock) returns to his earlier offbeat dramedy bent (Chuck and Buck), crafting one of the darkest comedies in which you’ll likely see an “SNL” alum.

Shannon plays Peggy, a single woman approaching middle age who has always felt more of a bond with man’s best friend than any man. She’s so ensconced within her paper-shuffling office job that she names her beloved beagle “Pencil.” At first glance, Peggy is surrounded by self-absorbed boobs ─ from her condescending and paranoid boss (Josh Pais) to her romantic relationship-obsessed work buddy (Regina King) to her intensely domestic and overprotective brother and sister-in-law (Thomas McCarthy and Laura Dern) ─ but she enjoys injecting snippets of boilerplate encouragement in these mostly one-way conversations and makes a point of providing gifts for her niece or donuts for her co-workers, much in the way she treats and nourishes her pet. She’s a kind and considerate soul content with being a doormat so long as she has Pencil to lick her face at bedtime. 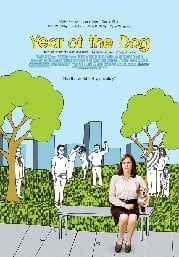 One night, Pencil gets into the slug bait in a neighbor’s garage and falls fatally ill. Shannon is devastated, but takes the opportunity to try new things, agreeing to a dinner date with the initially consolatory neighbor, Al (John C. Reilly), who turns her off with his gratuitous hunting anecdotes and vast collection of knives. Peggy then strikes up a kinship with the appropriately named Newt (Peter Sarsgaard), an animal shelter worker whose love of furry friends and strict adherence to veganism rub off on Peggy, and he talks her into rescuing an aggressive German shepherd from the euthanasia needle. Soon, she’s handing out animal rights literature at her office and indoctrinating her young niece as she grows increasingly militant in her beliefs. A series of disappointments and two dead dogs later, Peggy’s life unravels from zealotry to full-on psychosis. Yet even in the depths of Peggy’s mental doldrums, the film never strays completely from comedic elements, though the comedy itself is often bleak and deadpan as hell, such as when Newt matter-of-factly recounts a dream in which he’s raped by two bull mastiffs.

Himself a vegan, White doesn’t engage in any proselytizing, but instead highlights the virtues of treating all life as sacred while delicately poking fun at zealotry in all its forms. The film’s scope is surprisingly vast, dealing with issues as heavy as death and finding meaning within the temporality of life, all while sprinkled with comedic gems such as Reilly’s arguing for the merits of hunting endangered species so you can “get one before they’re all gone.” But White’s greatest achievement in Year of the Dog comes from reshaping well-worn tropes into a unique offering. The film serves as a commentary on domesticity and romantic relationships, and during its workplace-centered scenes, Year of the Dog provides more delicate satire on the office culture than any absurdist cubicle farm supervised by the likes of Michael Scott or Bill Lumbergh ever could.

In the hands of such an accomplished cast, even the minor characters are noteworthy, but this is Shannon’s show. She turns in a performance so stark in its difference from her off-the-wall antics of prior endeavors that it could have easily marked a Bill Murray-esque career shift from zany to more thoughtful comedy, but (based on Shannon’s film and TV work since) Year of the Dog may simply be the lone shimmering moment in a career that again will come to rest on its lowbrow laurels, in line with the equally dark Adam Sandler outlier Punch-Drunk Love.

Peggy believes that “animals live for love” and in her weaker moments she’s not averse to hoarding that love. Through such moments, the film speaks to the urge within all of us to go off the deep end for our passions, to snatch up all the happiness we can before we one day pass away. Year of the Dog acts as a dark comedy both subversive and life-affirming, as Shannon’s character temporarily loses her mind in pursuit of her life’s calling. With Hollywood routinely churning out disposable comedies worthy of being put down, Year of the Dog deserves rescue from the bargain bin.