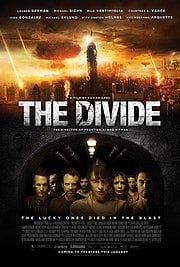 [xrr rating=1.5/5]In Xavier Gens’ post-apocalyptic horror thriller The Divide we learn that humans are inherently evil creatures who, when stripped of comforts and the tenuous guidelines of society, have no problem degrading and subjugating not only other people, but themselves as well. It’s a point the film uses its interminable 121 minute runtime to hammer home, an eternity of beatings, rape, maiming and murder as well as some of the most inept scripting and acting that I have seen in a long time.

After a poorly executed introduction where a nuclear bomb strikes New York, the nine principal characters take shelter in the basement of their apartment building. This is the lair of Mickey (Michael Biehn), the building’s superintendent/crackpot who just happened to be waiting for the end of the world and stockpiled the place with food and water. Almost immediately, things go to shit.

Gens populates his film with a cadre of unlikable, one-dimensional characters. You can instantly tell who will be the most odious when one of his first lines reveals his need to “take a dump.” But it doesn’t matter. Not a damned one of them is agreeable, except maybe Michael Biehn, but that’s just because he’s still treading on the goodwill accrued from appearing in The Terminator and Aliens.

Not only are the characters poor, but Gens makes matter worse by taking them so damned serious. This is not a fun end of the world picture. It’s not an exciting action movie either. Instead, it’s as if Gens had the idea to throw nine tropes in a room and command them to rip one another to shreds. And he allows them to do it by defying simple logic and reason in many inept instances.

Then there’s a sequence about 30 minutes into the film when a team of soldiers burst into the room and steal the young daughter of Rosanna Arquette. We never find out who they are or what they want with the girl. After two brief skirmishes, we never hear from them again. But the theft does allow Arquette to go batshit crazy and let herself be treated like a dog by the alpha males of the group. And I mean that literally. Fucked from behind by one guy holding a makeshift leash around her neck while eating baked beans out of the hands of another. I don’t think this is what the Stooges meant, folks

Gens tries to make matters interesting by employing an intensely serious soundtrack and every camera trick he could steal from Kubrick, Aronofsky or the Wachowski Brothers. In the hands of these greater directors, things such as Steadicam and bullet time blend into the fabric of the film. Here, they just play out as ridiculous. I’ve seen more artistry in an episode of “Freddy’s Nightmares.”

By the time The Divide mercifully reaches its conclusion, only one character escapes from that horrible basement. The entire film could have been the prelude to Fallout 3 (including the outfit the protagonist wears in the final shot). But unlike that video game, there is absolutely no humanity in The Divide. And it will take someone without much humanity at all to enjoy this film.