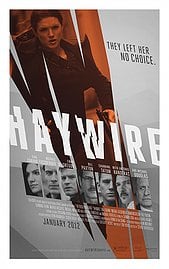 [xrr rating=3.25/5]An uncharacteristically sorrowful revenge flick, Haywire never really allows protagonist Mallory Kane (Gina Carano) the full satisfaction typically expected in such films. Unlike more conventional directors, Steven Soderbergh takes the chaos of everyday perception as a given, so that resolution is always partial at best. The actual details of the betrayal that drives the film’s plot are unimportant, not to mention largely uninteresting, and we’re hardly satisfied when we eventually learn that it was motivated purely by money. Mallory’s betrayers are really just the tip of an iceberg that cannot be grasped in its entirety, and the betrayal itself doubles as a symbol for the postmodernism implicit in Soderbergh’s directorial sensibility: his films describe a world of loss, one existing in a fallen state where nothing can be taken for granted except for the fragmentation of our experience. Because resolution is beside the point in this world, each minor victory, the apprehension of some important truth or the temporary assertion of one’s autonomy and independence, is only ever provisional. A recurring thematic motif in Soderbergh’s work is the inevitability of an individual’s loss of sovereignty to the faceless, impersonal system. Rendered in spatial terms: the protagonist stands in the middle of a whirlwind of information, besieged on all sides by forces beyond her control or by the always self-conscious presence of the camera. In this state of constant flux, all certainties are conditional.

Throughout Haywire, Mallory attempts to reassert her own independence from this flux, but we always see her in the constant state of motion that typifies her existence. In the one scene that takes place in her home, we barely imagine what it might be like for her to rest. One shot follows Mallory’s movements as she places knick-knacks on shelves, the camera spying on her from behind the shelving unit and moving from top to bottom along with her, but despite the intricate camerawork, seemingly designed to call our attention to her actions, our focus is drawn most of all to Kenneth (Ewan McGregor), Mallory’s employer, describing the latest job he would like her to do. Even such a relatively benign scene conveys the unceasing and nervous restlessness that characterizes a typical Soderbergh character, construed not as an independent individual but rather as a participant in a world or system that overwhelms her. This is why it seems so natural that Soderbergh has made a film about the spread of a virus, last year’s Contagion, as this is the exact kind of potentially unfilmmable plot — because its focus is not primarily on characters but on vectors — that nonetheless suits Soderbergh’s worldview. That film generated a distinct and precise pathos because the potential for this worldview to descend into cynicism was balanced by a plain need to understand the spread of a virus, to bear witness to those whom it affected and to learn from our mistakes.

So while Soderbergh may be a skeptic, he is not a nihilist. Skepticism, after all, implies a corresponding belief that real knowledge lies out there somewhere. The fallen state of Soderbergh’s films is a kind of postmodern equivalent to the Fall of Man, then, and Soderbergh’s films are attempts to reconstruct fundamental truths, albeit understood purely from the point of view of a pragmatic and empirically oriented man. Soderbergh’s characteristically fragmented editing style — he is most certainly a director with the mind of an editor — does not reflect a desire to obfuscate but rather acknowledges that we don’t have the full picture, so that we must reconstruct it from broken fragments in the same way we piece together Mallory’s story over the course of Haywire. But like Alain Resnais, Soderbergh also means for us to distrust these fragments, questioning the validity of our belief in their faithfulness to reality. Both directors exude a care for fundamental epistemological tensions.

A sequence early on in Haywire, in which Mallory and her team rescue a hostage in Barcelona, is indicative of this sensibility. On the surface, it is a conventional action sequence, though one infused with Soderbergh’s signature stylistic bravado, but flashes of detail, shots lasting no more than a second, in which we glimpse flecks of information, suggest a characteristic precision rather than the chaos many contemporary action filmmakers are accused of abusing through their exploitation of spatial and narrative ambiguity. With Soderbergh, we feel that the director, like some omniscient God, has already mapped out the moment-to-moment development of this hostage rescue, and so we can trust his construction of the event. Most astounding and profound of all, we can also trust that in Soderbergh’s world, real truth might actually exist, even if it is fleeting and distant. Moreover, this flurry of shots, held barely long enough for us to orient ourselves in this world, hints at all the filmed material that was left on the editing room floor, which in turn hints at all the material that could have been filmed but was not. A dizzying, never-ending chain of alternate shots, angles, and views, speculative possibilities, dawns on us.

Mallory cannot find satisfactory answers to all her questions, and she must instead settle for incomplete, though momentarily gratifying, acts of revenge in the form of hand-to-hand combat. The blunt heaviness of these fight sequences offers a temporary solace, a robust counterpoint to Soderbergh’s natural braininess. As with Soderbergh’s casting of pornographic actress Sasha Grey in The Girlfriend Experience, the use of MMA fighter Carano reflects an attempt at a new kind of realism. Carano’s expertise lends the fight sequences a startling intensity, making her appear to be the one honest person in a world of untrustworthy actors. Haywire is a self-consciously slight film, disappointing only in how its best ideas linger on the edge of possibility, and it might be fascinating most of all for what it tells us about Soderbergh. Mallory jumps through all the requisite genre hoops, but Soderbergh’s denial of full resolution hints at much darker tensions underneath the facade.