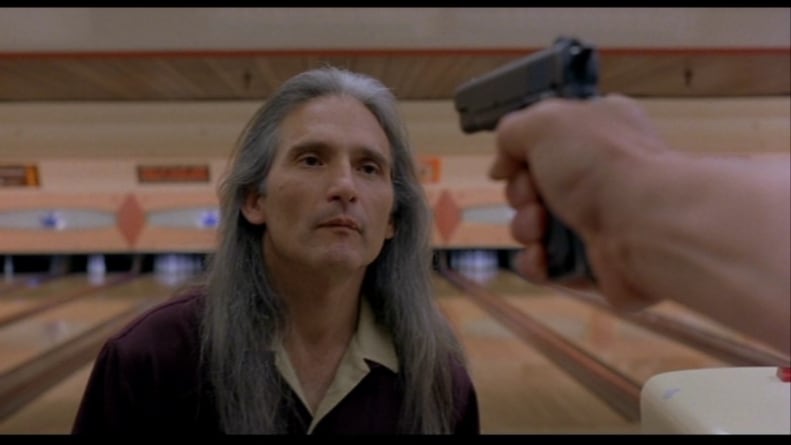 Okay, let’s be real: the performance from Monte Hellman’s ’70s anti-road movie that everyone remembers is not James Taylor as the affectless, unnamed driver, but Warren Oates as his colorful racing rival. Oates is great fun to watch, but the film wouldn’t work without Taylor’s bewildered displacement — that weird sense that he seems to know he doesn’t belong in the movie. In a film about drifting souls, Taylor’s studied vacancy disproves that old Tolkien quote: yeah, maybe all those who wander are lost, or at least they were in 1971. When the gentlest of crooners, whose reassuring coos had made even the apocalyptic terrors of “fire and rain” sound pretty and wistful, barks out the movie’s most famous line — “You can never go fast enough” — as a defensive, bellowing rebuke, it’s enough to make the open road look like the most hostile place in America. – Brian Wolowitz

I so want to believe that Jennifer Hudson is an equally scrupulous but more successful version of her Dreamgirls character that I gag on every one of her fat-shaming Weight Watchers commercials. Hudson’s first acting gig after “American Idol” of course banked on her conflagrative voice, but Hudson did more than burn down “And I Am Telling You” to grab an Oscar for Best Supporting Actress. As Effie White, she seemed to embody the proud Dreamette spurned by friends and family to make the thinner, allegedly prettier, and microscopic-voiced Deena the group’s lead singer. Beyonce has proven commercial appeal, after all. White suffered for her pride, living in anonymous poverty as her friends succeed. Hudson subtly and beautifully tempers the character’s pain with indignation, her pride with regret. I just wish she’d stop trying to tell me losing weight was a greater accomplishment than this performance. – Katie Bolton

Actually, his name was Marvin, then Michael and is now Meat Loaf. As indicated by his antics on a certain Donald Trump-hosted reality show, Meat Loaf is now a caricature of himself, as many celebrities become in the autumn of their careers. But Meat Loaf was once iconic, and somehow the fucker still annually sells 200,000 copies of Bat Out of Hell. His turn as the bitch-titted lout Bob in Fight Club, however, is no laughing matter. Sure, Loaf provides some comic relief with his oversized man-mammaries, but he also instills the film with one of the few truly human characters, replete with insecurities, goofy laughter, tears and unbridled enthusiasm. He’s one of the few characters in the movie that is truly alive, and he also plays a believable corpse. – Josh Goller

Long ago, there was a time called the 1990s. It was a brief, glorious time in which baggy denim and plaid was stylish, adolescent males curtained their hair with impunity and boy bands freely roamed the earth. Of these, a young man named Marky Mark led a crew known as the Funky Bunch and unleashed some of the worst hip-hop known to history upon the world, largely through sampling even Diddy would find egregious and incredibly toned abs. But then a strange thing happened: Marky Mark set his sights on acting and reemerged, phoenix-like, as Mark Wahlberg, respected character actor. While he received some critical praise from a role in The Basketball Diaries and his dark turn in the teen thriller Fear, it wasn’t until director Paul Thomas Anderson cast him as naïve porn star Dirk Diggler in Boogie Nights that it became apparent the erstwhile member of NKOTB was actually a talented actor. As Diggler, Wahlberg was a wholly sympathetic, sometimes contradictory character, a young man defined by a sole talent in both joyful and horrible times. And whether bottoming out in a coke deal gone bad or ecstatically accepting an award for fucking well, Wahlberg was brilliant. – Nathan Kamal

“He’s fragile, very fragile.” Such is how the Dude aptly describes pacifist and fellow bowler Smokey in The Big Lebowski moments after Walter draws a firearm on him for – allegedly – stepping over the line in a bowling match (but then again, it was a league game). Played with expert timidity by country musician Jimmie Dale Gilmore, Smokey meekly shuffles through his only scene, scrawny and harmless, his fleeting moment of defiance quickly dissipating the moment Walter brands that weaponry. How Gilmore manages to make Smokey seem even punier than the laws of physiology allow as Walter towers over him is a stroke of brilliance. Later on all Smokey can muster is to feebly submit the incident to the league office – which of course leads to nothing – and even then he’s apologetic about it. Apparently some types of aggression will stand, man. – Eric Dennis