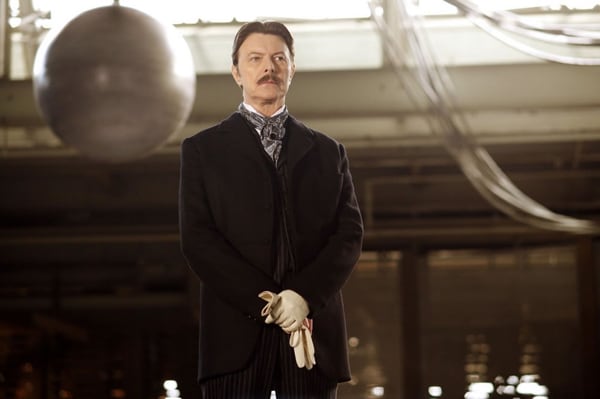 Bowie has been memorable in several films—his role as an aloof extra-terrestrial in The Man Who Fell to Earth almost counts as typecasting—but his appearance as inventor Nikola Tesla in Christopher Nolan’s The Prestige is his finest screen work to date. Interested in the supernatural capacity of science, Tesla serves as the Jung to Edison’s Freud, and the off-screen but vicious conflict between the two reflects the conflict of the warring musicians driving the plot. Both pairs of characters are masters of their fields, and they retard the development of those arts through their petty squabbles. Bowie plays Tesla with an air of dignified tragedy, caught up in a feud he knows will kill him professionally, if not literally, but still striving to make his mark before Edison’s boys find him. Not even Roeg used the musician’s arty remove to such great effect. – Jake Cole

Mos Def’s performances have been pleasantly consistent in the past decade, the hip-hop icon turned actor having run through a series of understatedly believable turns (in Monster’s Ball, as Ford Prefect in The Hitchhiker’s Guide to the Galaxy and, to a lesser extent, in Michel Gondry’s Be Kind Rewind) imbued with substantive humanity and humor. By contrast, the plainspoken acerbity of Detective Sergeant Lucas in 2004’s The Woodsman is a notable exception. Not for the particular gravity of Mos Def’s performance as Lucas, however, but for the high-strung meanspiritedness and exhaustion that plays across his usually relaxed face during understandably circumspect exchanges with newly paroled child predator Walter (Kevin Bacon). Mos Def, economically telegraphing to what extent the spiral of recidivism eats away at Lucas internally, ends one powerfully emotional scene with the seasoned conclusion, “I don’t know why they keep letting freaks like you out on the street. It just means we gotta catch you all over again.” So desensitized to the monstrosity Lucas sees daily in his career that he has begun in some small way to reflect it, it’s a subtle effect, one which Mos Def’s effortless artistry makes even more impressive. – Joe Clinkenbeard

Unless your taste in music fits the classic Blues Brothers definition of “both kinds, country and western” there’s a good chance your 1996 self didn’t even know that Dwight Yoakam was already a wildly successful country music star before he took up acting. His turn as Doyle, the abusive redneck in Sling Blade, was nothing short of brilliant. Yoakam captures a certain kind of middle aged frustration and bottled anger with all of the nuance you would see in a classically trained actor, which he most certainly wasn’t at that point. Is there anything more desperate than a band practice gone wrong for a garage band of forty-somethings? When Yoakam slams his wheel chaired band mate into the front door, and lets all of Doyle’s pent up rage out in a drunken fit, he captures the essence of an anger that’s borne of a lifetime of boozed addled failure in such startling fashion, you would never think him a seemingly inexperienced actor with only a scant few roles under his belt. It makes you wonder just how far Yoakam could have gone if he started out as an actor with a music jones instead of vice-versa. – Tom Volk

Frank Sinatra in Some Came Running (1958)

A good case could be made that Frank Sinatra is cinema’s greatest singer-turned-actor. He brings a theatrical style to his music and, likewise, an almost musical quality to his acting, always riffing soulfully with the roles given to him. Some Came Running may be his best performance, certainly my favorite of the ones I have seen, and it’s a testament to Sinatra that his performance is so critical to the greatness of what is one of my favorite films. As Dave Hirsh, Sinatra plays a man caught between two worlds, not quite fitting into either. He’s rough and scrappy, the kind of guy you imagine the real Sinatra to be like, but aside from being a veteran in the Army, he is also a writer and intellectual, too poetic and sensitive in spirit to feel at home with his peers. There may be some of Sinatra himself in this performance, given the singer’s struggles with depression (resulting in suicide attempts). Some Came Running is melodrama at its finest, seeing no end to life’s contradictions but passionate living them out with tragic commitment. Sinatra’s performance is not just good acting but the bringing to life of a human being. – Trevor Link

Sixty years ago it was a big deal and newer trend for professional musicians already armed with celebrity status to star in Hollywood films. In recent years (and I shudder to think about this), there has been a cross section of musicians from Kelly Rowland to Jack White to “American Idol” runners-up that star in forgettable films. In the early 1960s the famous American jazz enigma Chet Baker had relocated to Italy where the jazz scene was on fire and opiates were a lot easier to come by. Elvis Presley and Frank Sinatra had taken likely cracks at an alternative visual medium besides live musical performances and getting dreamy parts in fluffy American movies. The instance of Baker’s musician-turned-actor-move is a little different. Leading up to his infamous stint in the Italian film world where he would either play himself or supply the score, Baker starred as Jockey in 1955’s Hell’s Horizon, a member of a B-29 crew who lulls his compatriots into ease with his trumpet playing.

See the excellent 1988 documentary Let’s Get Lost by Bruce Weber for an incisive look at this time period before Baker eventually stopped making music and being an actor in weird Italian movies and B war epics like Hell’s Horizon to eventually take enough drugs to fall out of a window and die on a street in Amsterdam, still with trumpet in hand. – Sky Madden