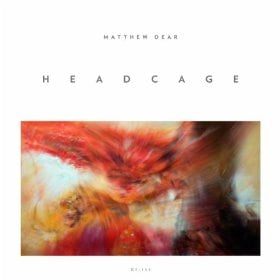 [xrr rating=3.75/5] Last time we encountered Matthew Dear, it was through the disorienting alley haze of Black City, an album (or place) you couldn’t escape without dilated pupils, a passionate bruise, a thin coating of excited or perhaps exhausted perspiration, depending on how compromised you were by the trance. But all of the best and worst drugs eventually wear off, and even the longest nights give way to rude sunlight. Where Black City was a whole-self absorption into intoxicating dance-murk, Dear’s new four song EP, Headcage, manipulates his draggy, narcotized baritone in pleasurably unsettling ways.

Rhythmic sniffs and huffs act as corporeal percussion in the title track opener, contrasting unnatural interruptions of breath with a metronomic cycling of trip-happy blips. “Your mamma won’t care/ If we stay out tonight,” he teases with an oil-slick vocal, but this song isn’t so much about the urge to “throw your arms in the a-a-a-a-air” as much as the subliminal impulse behind it all, the words “want, “I know” and “life” repeating and recycling like a greedy mantra. The vocal treatment in “In the Middle (I Met You There)” is a departure from the norm, not just for this release but for Dear’s career portfolio. Collaborating here with Jonny Pierce, the Drums frontman sends out a casual, easy melody – something we’re not accustomed to hearing in Dear’s work. The melody line is mirrored back in synth tones and block chords between verses until the coda, where background fluidity degrades into discordant stutter. Dear joins Pierce in duet, singing in unison but octaves, floors, geological strata apart.

The final two songs of Headcage are the most experimental, which naturally inclines us to ponder whether these developmental tracks predict what’s to materialize on his upcoming full-length, Beams. The opening loop of “Street Song” plays like a repurposed snippet of late ‘70s educational filmstrip music, a flutey whole-step melody that sounds sun-faded and as if the tape itself has worn thin, like a recording of a recording of a library cassette. Subtle thumb thumps provide a beat as Dear’s transmogrified vocals weave in. The tool he uses both elasticize and elongate his lyrical elocution. Already in falsetto, the compounding effect mimics the song of a creature that is only almost human, trying to pull up words from the inside out, exiting these hard-won utterances via the imperfect vehicle of an exaggerated mouth. Finally, “Around a Fountain” may be the strangest entry of all, dislodging tribal ruffling with industrialized roar. Dear’s words are clipped in opposition to an underlying prayer chorus of oooohs. With the ends of his verses echoing over and fading out, this hymn/anti-hymn is rife with competing, uncomfortable, yet arresting textures.

It may be a contradiction of concepts, but Headcage sees Matthew Dear not confined to his grotesquely complex interior space but inviting others inside to rattle things up. In addition to Pierce’s appearance, producers Van Rivers and the Subliminal Kid (involved in works by Blonde Redhead, Glasser, Fever Ray) reworked some of the demo material – “inject[ing] steroidal life,” comments Dear himself – into the title track. His “man alone” work has been steadily riveting, one can only wonder how the presence of outsiders might impact and amplify his signature brand of solipsistic pathos. In Headcage, his eccentric misery seems to love the company.