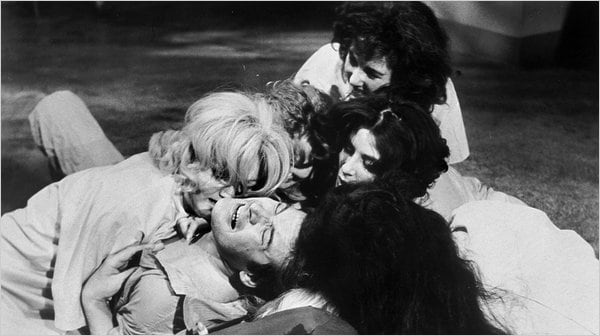 By the time of Shock Corridor’s release in 1963, Samuel Fuller had almost had enough of Hollywood. Kicked and shuffled around by studios and left to his own low-budget devices over the past decade, the resulting free agency allowed him tremendous discretion in his films. And Shock Corridor – about a journalist named Johnny Barrett (Peter Breck) who, with the help of his editor as well as his stripper girlfriend Cathy (Constance Towers), gets himself committed to a mental hospital, paints the picture of a director still in control of his abilities and unwilling to skirt controversy, even in cases when financing and distribution might have been major sticking points.

In checking himself into the hospital, newspaperman Barrett’s is not the noble goal of 19th-century muckraker Nellie Bly – to expose abusive, unsanitary conditions at mental hospitals – nor that of 1973’s famous Rosenhan experiment, in which a group of individuals with no history of mental illness, desiring to discover how long they’d be committed if they claimed, only at first, to experience auditory hallucinations (the word “thud,” mainly) but acted otherwise sane, aimed to reveal the slippery science underlying psychiatric diagnosis. Rather, Barrett’s voluntary institutionalization grows from a singular, almost entirely selfish need: to solve a murder and win a Pulitzer. His overzealous monomania, by film’s end, proves to be his undoing, with hefty helpings of sexual deviance, electroshock therapy and fisticuffs added to the mix. Pure pulp, in other words – at its finest. 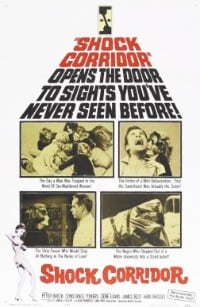 The mostly understated and steady Breck, despite the occasional campy inclination toward overacting, was a natural choice for the singularly obsessed journalist, his slightly cherubic cheeks, deep-set eyes, prominent brow and wide jaw line lending him a stoic yet darkly vulnerable aura, an aura that evaporates whenever Barrett, experiencing rapid decline in sanity, screeches like a bird being led to slaughter. As the assignment drags on and his hold on reality deteriorates, Barrett’s gradually more unbridled id means to communicate the faked repetition of others asylum inmates’ as well as how the hospital’s hair-trigger anarchism has an effect on him, in a way that only his girlfriend Cathy properly gauges, even long before his experiment commences. Apart from the attendants, resident medical professionals and the three incarcerated witnesses he means to manipulate into trusting him and divulging their testimony, the scene-stealing Larry Tucker and Fuller favorite Neyle Morrow (with minor roles in The Crimson Kimono, Park Row, Forty Guns and others, and credited only as “Psycho” in Shock Corridor) are among the inmates populating Barrett’s newly claustrophobic, cloistered world. Throughout, Towers (Fuller’s choice actress at the time and the lead in Shock Corridor follow-up The Naked Kiss, perhaps explaining why a photo of Fuller chomping on a cigar adorns her character’s dressing room backstage) tries to release him from the vice-like grip of the institution, to little success.

While the effective inability of trained medical personnel to accurately diagnose mental illness would be something for the Rosenhan experiment to dissect, in Shock Corridor Barrett’s trustworthiness is a point of contention among staff at the hospital from the very beginning, necessitating exhaustive rehearsals prior to his being committed with a friendly psychologist, Dr. Fong (Philip Ahn), who guides him early on through the ways the doctors and staff would attempt to weed him out. Once he gets in, though, his ability to pierce the veil of insanity in others to get at the truth rises disproportionate to his ability to break through the cloud of madness slowly growing in his own tortured, voice-over filled mind. Somewhere between the scene where nymphomaniacs pounce on Barrett like the only live fare at a zombie picnic and the resident psychologist’s ironic observation to his girlfriend Cathy that, “a man can’t subject himself to tests and live in a mental hospital… and expect to come out of it sane,” it becomes clear that Barrett, for all his investigative skills, might be in over his head (and I don’t mean hydrotherapy). This isn’t a pathology merely limited to Barrett: nearly every character displays this same fragility stemming from overwhelming external pressures, the most chilling example of which is the schizophrenic African-American patient Trent (Hari Rhodes) who adopts the viciously racist tendencies of his dehumanizing oppressors following an abortive stint at a newly desegregated university.

Although the decidedly low-budget set – dry ice in the pots on the kitchen stove, false backdrop in the sterile, fluorescent hallway where the inmates congregate – and somewhat choppy job performed by editor Jerome Thoms, who also assembled Fuller’s The Naked Kiss and The Crimson Kimono, detract somewhat from the raw intensity of the plot’s forward motion, they aren’t sufficient to derail the project. In fact, as the film builds towards its fever-pitch conclusion, when the inmates’ (full-color) hallucinations, borrowed from footage left over from Fuller’s unfinished Amazon epic Tigrero and the House of Bamboo shoot in Japan, are somewhat clumsily worked into Shock Corridor, those sorts of concerns are melted away in light of the heavyweight commitments displayed by cast and director alike. And Fuller, in keeping with his habits, pushes the boundaries of acceptable political discourse, Shock Corridor eventually revealing itself as less of a thriller than it is a screed, an indignant, haranguing finger leveled at three psychoses – bigoted xenophobia, paranoia and excessive, pathological retrospection – that still plague America to this day, each represented by a heavily unstable witness that Barrett applies considerable determination toward extracting information from.

The touch of cinematographer Stanley Cortez (The Magnificent Ambersons, The Night of the Hunter) manifests itself in the film’s relaxed middle shots and intensive, tight close-ups, his camera in a constant state of movement – reflecting the restless inner and external machinations of the asylum and its disturbed patients. Though Cortez would be sacked from the set of Chinatown more than a decade later after only one week as D.P. due to creative differences with Roman Polanski, his deliberate eye for angular light (“an incredible thing that can’t be described,” in Cortez’s words) and thrown shadow lends Shock Corridor a pleasingly neo-noirish feel, heightening the sense of B-movie tension pervading it. And his purportedly sluggish working process seems to have had little effect on the breathlessly efficient Fuller, who wrapped shooting Shock Corridor in a little over two weeks. Cortez would work with Fuller again the next year on the similarly psychological The Naked Kiss. 1964 would see the close of the writer-director’s tumultuous relationship with Hollywood, an affair as similarly maddening as that which Johnny Barrett struggles with – and ultimately succumbs to – in the quirky, honest and shocking Shock Corridor.