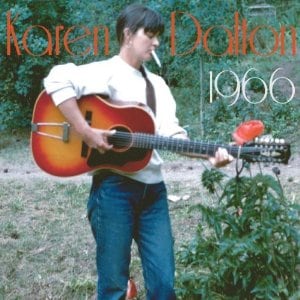 [xrr rating=4.25/5]Never entirely comfortable in a studio environment, Karen Dalton produced just two albums in her lifetime, 1969’s It’s So Hard to Tell Who’s Going to Love You the Best and 1971’s In My Own Time. Despite this meager output – or perhaps because of it – she has remained something of a folk music legend. Most famously, in his 2004 “memoir” Bob Dylan praised Dalton as his favorite singer in the early 1960s Greenwich Village folk scene, while more recently Devendra Banhart has cited her as an influence in his apparent quest to churn out increasingly mediocre folk music that strongly appeals to well-heeled collegiate neo-hippies throughout America.

With the release of the simply titled 1966, the number of posthumous Dalton releases now surpasses that of her studio efforts. This is fitting in a way: despite their charms and warm production values, Dalton’s studio albums are somewhat tentative, and she tended to do her best work outside the studio. Recorded to reel-to-reel tape at the singer’s remote Summerville, Colorado cabin as possibly a rehearsal for a live show, 1966 is a remarkable document and probably the finest Dalton release yet, a wonderfully lo-fi recording that captures the musician in an intimate manner at her most unguarded and focused. Consisting of traditionals, folk standards and cover versions of songs by Tim Hardin and Fred Neil, it’s a perfect entry point for those unfamiliar with Dalton as well as a stunning artifact for longtime fans.

Of all the traditional folk songs on 1966, “Katie Cruel,” succinctly performed here in Dalton’s distinct banjo style and with her vocals slowly drawn out, is the one for which the artist is best known; indeed it’s easy to see (and hear) what likely drew an introspective singer such as Dalton to this outcast tale. Her voice was an expressive and poignant mix of sugar and sandpaper, and on this tape Dalton is masterful on a deliberate, mournful take on “Cotton Eyed Joe” and a downcast pair of Tim Hardin tunes, “Reason To Believe” and “While You’re On Your Way.” There are standout moments everywhere on this recording, particularly in the blues-inflected vocals of “2:19 Train” or in the roughly executed run-through of Neil’s “Little Bit of Rain.” Less successful are four duets with Richard Tucker, all of which come off as a bit ragged and rushed.

Much has already been written about Karen Dalton’s struggles with alcohol and drugs; certainly with all the limitations that hindsight brings, it’s difficult to listen to her music without being tempted to view everything she sang as somehow reflecting her hard-living life or foreshadowing her early death. But this reduces a singular talent to just another cautionary tale. What 1966 shows us once again is that Dalton was a unique interpreter of songs no matter their style or origins, her scarred voice always sounding older and wiser than her years. On 1966 it’s again obvious why Dalton continues to find an audience, even as plenty of her folkie contemporaries have been forgotten to history.