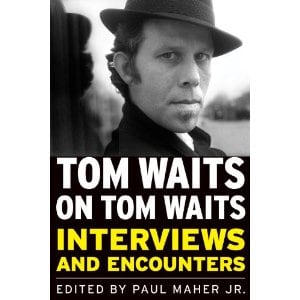 [xrr rating=3.0/5] Tom Waits on Tom Waits: Interviews and Encounters, a compilation of interviews given by the reclusive musician between 1973’s Closing Time and the 2008 collection Orphans: Brawlers, Bawlers & Bastards, is a tale of two Tom Waits. Compiled by Paul Maher Jr., the anthology zeros in on the sharp contrast between the Waits before meeting wife Kathleen Brennan and the interviews and strange music that came after.

Of course, if you are a Waits fan you will know the man’s music changed from the boozy to the bizarre sometime around the 1983 release of Swordfishtrombones, or rather shortly after he met Brennan while working with Francis Ford Coppola on the film One from the Heart. Without pinning too much on the Waits AB (After Brennan), the musician has always had a way with words. His first act is filled with street poetry: tales of the dissolute and dissolution. Look no further than “Invitation to the Blues” from Small Change (1976) to hear Waits at his barroom best, singing of ruined lives, broken down cars and soaked shoes. But Maher is onto something, demarcating the end of the book’s first section when Waits meets Brennan.

Arranged chronologically, Tom Waits on Tom Waits presents an oral history but on the musician’s own terms. Maher fills in the gaps between each release with a slight narrative, but most of the words here belong to Waits (and some to the hapless music writers who try to pin him down). By no means essential, the collection does serve as a curio for those who want their Waits interviews in one place. Many of the interviews in this collection come from fringe publications ranging from Harp to Big Brother. Maher is upfront that the publication fees for interviews printed in Playboy and Rolling Stone were too prohibitive to warrant paying for them. And while some of the interviews here are indelible, many of them are fluff pieces or, even worse, written by some jackass who tries to emulate Waits’ beatnik style of the street.

The opening interviews catch Tom Waits as he is still constructing his persona. Sometimes he is straightforward, other times crabby and cryptic. A lot of the time he is inebriated. The constant touring, living in shitty motels and lack of sleep clearly wore him down and as he snaps at his interviewers or dodges questions, it’s the toll of the road and lack of money that’s talking. But after marrying Brennan, things changed for Waits. Although his responses grew more quizzical (the more direct the question, the stranger the response), he does credit her with helping him quit booze and live a cleaner life. However, many of these interviews are filled with facts about the insect world and other strange ephemera.

You are not going to learn that much about Tom Waits the man from reading this collection, but you will certainly learn his shtick. In fact, many of his responses are the same interview to interview. But rather an incisive look at Tom Waits, the book is better seen as a Rorschach test of lazy music journalism. Many of the interviewers simply ape the same questions asked in previous interviews. This makes for boring reading, especially by the time you see the same question for the fifth time in as many pages. More than anything, it is an indictment of music journalists, especially if Waits is the golden goose in this regard. Of course, I’d love to interview him, but it’s doubtful his handlers will let this publication anywhere near him.

Not all the interviewers here fall into line and churn out cookie cutter questions though. One of the best pieces is written by Bart Bull for Phoenix New Times in 1977. Waits had just released Foreign Affairs and was in a particularly bad mood that evening. Rather than let Waits run roughshod over him, Bull fought back. Written in a narrative style, it stands out amongst the typical Q+A format that dominates this book. And what did Bull gain from giving the man such a negative profile? The chance to interview him again 10 years later for SPIN. In Tom Waits on Tom Waits, many music journos learn that flattery gets you nowhere.

For the Waits fan, Tom Waits on Tom Waits is inconsistent and sometimes repetitive. It is not a book you will want to read from cover to cover. However, it is a perfectly suitable companion after an evening listen to Rain Dogs if you want to hear the man himself speak, even if he’s really not really saying anything more than trivia and fabrications.