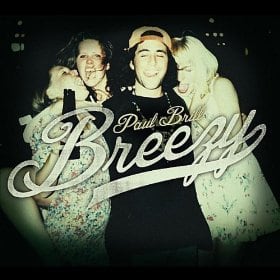 [xrr rating=2.0/5]The single biggest flaw to Breezy, the latest effort from composer/songwriter Paul Brill, is that it is an album without an identity. Like 2006’s Harpooner, it further distances Brill from the type of glitch-folk he favored on his earliest recordings, with the musician throwing an all-out blitz at his songs, this time courtesy of a 12-piece band that counts among its tools flutes, oboes, English horns, saxophones and clarinets. But the album almost always feels like a collection of indistinct tracks cobbled together randomly, with nothing to really unite them or make them stand out as essential pieces of a whole.

Breezy does, admittedly, sound very nice for at least a little while. Brill clearly still knows his way around a studio, and a few songs – the up-tempo, funky “Sunny Guy” and “Debussy Roses,” the punk-ish “The Royal Oui” – are undeniably catchy. A couple stripped-down ballads are seemingly designed to tug at the heartstrings amidst the album’s swollen instrumentals, and nearly do: steel guitar is featured prominently on both the title song and the devotional “S’Wonderful,” though the latter track tends to come across as somewhat saccharine.

But there is no sense of either subtlety or coherence on Breezy. Most of the time it plays like an unfortunate smashing together of various genres, its songs little more than instrumental collisions that occur for no real reason and that are of very little account. It’s the classic case of an album that tries to do too much, and as a result actually does very little: “Kissing Cousins” is perhaps the most egregious offender, an amalgamation of too many different styles and disparate instruments. Likewise a second, full-band version of “Sunny Guy” falls flat, done in by a set of horns that are beyond cheesy. That most surefire way of getting a point across in song – profanity – is forced; in “How High the Fishes” Brill curses like an eager child discovering the queen mother of all dirty words for the first time. With droppings from so many different milieus incorporated into its songs, Breezy ends up with all the traits of empty genre exercises, musical muscle being flexed just because it’s there.

As a composer Brill has received some significant attention recently, primarily due to the string arrangement he crafted for an acoustic version of U2’s “Walk On” that appeared in the HBO film Burma Soldier. It was a solid display of Brill’s talents, something that’s in disappointingly short supply throughout Breezy. For all its bluster and overstuffed arrangements, its songs never really cut through as anything other than stylistic workouts. And, to at least this listener, those workouts quickly become exhausting and unrewarding.