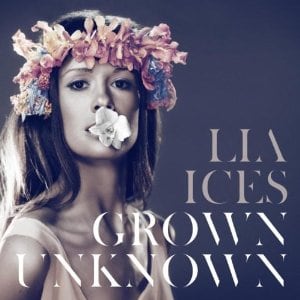 Having ditched Rare Book Room for Jagjaguwar following release of her 2008 debut, Necima, last January’s Grown Unknown saw the unleashing of a rawer, more colorful side to New York singer-songwriter Lia Ices’ sound, even while it retained some of the stark dolorous beauty of her first record. Exploding in percussive- and piano-led fractals and feathery, funereal dirges, it’s an expert showcase for the classically trained but experimentally inclined Ices’ strengths, sufficiently developed and on occasionally stunning display just two entries into her nascent career.

Lush and idyllic in places, deep and sonorously hollow in others, but always cut with saturated vocal turns and cramped lyrical symbolism, the album inhabits space wedged somewhere between a down-tempo Bat for Lashes and the twee spaciousness of Joanna Newsom. Comparisons to piano balladeers like Tori Amos and Regina Spektor, however, are less salient on this slower-burning, decidedly riskier and less theatrical second outing. While little on Grown Unknown approaches the glorious gilded shuffle of Necima’s “Half Life,” it more than compensates with inclusion of strong gospel, soul and avant garde influences. There’s also a confidence on the part of Ices that exhibits itself in the naked emotive vulnerability she allows the album’s gapped arrangements to at times reveal in the subtle stops, pauses and turns that often careen and stretch off in startling directions.

The title track plays host to some of these impulses, its handclaps and swirling violins opening the song up for wondrous intersections of breathy sanctitude, and daring rhythmic shifts injecting it in intervals with an intensity that borders on eeriness or menace. “Love is Won,” the album’s lead-off, eventually breaks from the insubstantiality of Ices’ spectral vocals and the forlorn piano that characterizes its introductory seconds before adopting a stumbling percussive weave that, sped-up, would register distinctly as hip-hop. Its pulsed whisper reaches organ-tinged heights when Ices recovers from tying together the disparate elements enough to demurely boast, in a matter-of-fact cadence, “I’m about to pounce so I can tame the cat/ So I can find the myth and let forever out.”

“Ice Wine” and album closer “New Myth” communicate the Ices aesthetic clearly, strings dropping in and out in concert on the former like synchronously melting icicles dripping onto sheet music, capering in sharpened outbursts while the soft drawl of an organ underpins the track’s vibrantly textured chorus. As for “New Myth,” its quiet step solemnizes haunting pop gymnastics, casting long shadows across the watery, vibratory thrum of guitar barely chiming away half-unnoticed below Ices’ timelessly expansive breathing: “The choir’s singing in the language we all know/ You’ve never known me better than now/ And this newest song sings like the oldest sound.” And the softly swaying, paper-thin but soulful, lethargic yet lullaby-light “Little Marriage” is a jewel unto itself.

Which isn’t to say Grown Unknown is without barer branches. Second track “Daphne,” for which Ices roped Justin Vernon of Bon Iver into backing vocal duties, languishes beneath the burden of a more traditional, straightforwardly “folk” structure, never quite emerging from the misty dark its transition to dramatic, walloping waves of back-beat guitar squalls is intended to facilitate. Though it’s a noble attempt at recasting the Apollo/Daphne fable, it works largely because of Ices’ vocals only, soaring far apart as they do from the melee where Ices leaves Vernon, the presence of whom adds little to the tune overall that any equally yellowed-sounding, balladic pairing couldn’t. Similarly, “Lilac” is hardly memorable, and the late-coming cross-directional flutter of “Bag of Wind” isn’t enough to save the downtrodden toe-tapper from largely running aground. Occasionally even crisp, martial force in a song’s percussive signature or the surging pulse of multi-layered harmonies (“After Is Always Before”) can’t spare it from dragging on, demarcating the shifting limits of effective experiment. Hung in large part on delicate frames whose contents communicate familiarity and warmth even as its more avant edges press jagged, acute corners against the boundaries of songwriting convention, it’s a powerful second effort for Ices, however gnarled and knotted the winding path it carves in implementation.