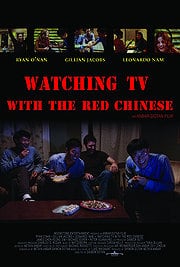 [xrr rating=2.5/5]With any cinematic adaptation of a novel, there’s always a question: how is it different? In a novel format, the written word has a certain structure, vastly different from that of a film. Far too often, filmmakers try to ape the essence of a written story without altering for the medium (the arid pace of Merchant-Ivory productions, for example) or discard it entirely for entertainment value (Guy Ritchie’s Sherlock Holmes adaptations come to mind). In adapting Luke Whisnant’s 1992 novel Watching TV with the Red Chinese, director Shimon Dotan hits square between a straightforward retelling of the book in movie format and clumsily trying to tell the story in a new way.

Set in New York City in 1980, Watching TV with the Red Chinese opens with a chaotic, almost random series of brief scenes, mostly sharing the same characters but otherwise seemingly unrelated. Dexter Mitchell (Ryan O’Nan) is a young teacher who’s taken three Chinese exchange students under his wing, haphazardly teaching them American concepts and “codes” as he puts it. He’s also engaged in an on-again, off-again relationship with Suzanne (Gillian Jacobs), a young woman with personal issues including, but not limited to, a stalker of an ex-boyfriend, “Zap” Czapinczyk (Peter Scanavino). All of this information is parceled out slowly, the fragmented scenes making it difficult to build a sense of relationships and chronology. Unfortunately, Dotan further raises the difficult bar by filming various scenes in black and white, some in color, some as framed through Super 8 footage. Part of the pleasure of watching a movie that moves in non-linear ways is figuring out exactly what’s going on, but overloading the stylization tics is just a bit too on the nose.

As the story goes by, it gets increasingly dense and self-referential. A friend of Dexter’s films the three Chinese men, Chen (Leonardo Nam), Tzu (James Chen) and Wa (Keong Sim), compiling interview footage that he rather pretentiously edits throughout the course of the movie…under the title Watching TV with the Red Chinese. Similarly, as the characters increasingly discuss the nature of free will, random chance and unseen patterns controlling life, the random nature of the film begins to streamline itself to a much more traditional storytelling. It’s almost as though the film decides that once the parallel is made, it can be abandoned and lets a fairly ordinary love triangle story dominate.

By the climax of the film, only Chen has been delved into with any depth, beginning a doomed affair with Suzanne and developing a fear of African-Americans after being violently mugged. Tzu and Wa mostly work as foils for Chen and a method of communicating with Dexter, with the latter being notably underdeveloped and relegated to essentially the role of culture scold. But while Mitchell begins and ends the movie as a sad-eyed, perpetually exhausted moper, Chen at least seems like a full developed character. Similarly, as Suzanne, Jacobs does a fine job, but there’s only so much you can do with a character that’s largely just a confused, somewhat crazy girl.

Bewilderingly, Watching TV with the Red Chinese is bookended by animated scenes, or rather parts of the screen being drawn as animated briefly. It’s a flashy, wholly unnecessary bit of flair, that when combined with the occasional bit of flat narration by Dexter, is a perfect sign of a movie overreaching. But when it simply allows the characters to spend time together, taking pleasure in each other as in a warm scene of neighbors playing touch football in the street, it stands as a much stronger, much more human movie.