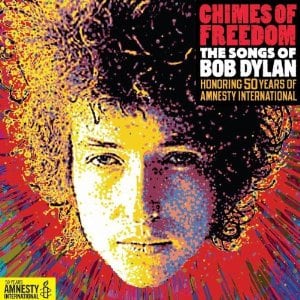 [xrr rating=2.5/5]There’s a saying that “nobody sings Dylan like Dylan,” a durable phrase that’s been borrowed for a strange double-album of two previous covers album releases (Good as I Been to You and World Gone Wrong) and, more perversely, for an ongoing fan-made bootleg series that now consists of several dozen volumes. It’s a compliment to the man himself, of course, but it’s also a clever way of acknowledging that many artists bomb dreadfully in their attempts at tackling Dylan’s catalog.

This truism is impossible to shake when listening to Chimes of Freedom: The Songs of Bob Dylan Honoring 50 Years of Amnesty International, a whopping four-disc set with nearly at least one selection from every Dylan album pre-Love and Theft. Though its scope is ambitious and doesn’t focus solely on Dylan’s 1960s material as is so often the practice, anyone hoping for a holy grail of cover songs is likely to be disappointed. Chimes is ultimately a mixed bag, its inventive moments offset by awkward performances held hostage to a particular artist’s affectations. Perhaps the most interesting thing about Chimes is its wide variety of contributors; nowhere else will you find the old guard like Kris Kristofferson, Johnny Cash, Steve Earle, Billy Bragg and Lucinda Williams sharing living space with current mainstream darlings like Adele, Maroon 5, Miley Cyrus and Ke$ha. No, we’re not making this up, but then again, one of the quickest ways for a popster to gain some credibility is to rub up against a Dylan song.

The most successful adaptations on Chimes are those in which either the artist’s style already lends itself well to handling a Dylan tune or the execution is kept as simple as possible. Jim James’ vocals are tailor-made for certain Dylan songs, so it’s not surprising that My Morning Jacket’s slowed-down, country-ballad version of “You’re a Big Girl Now” dwarfs almost every other song here. Other standouts include a spirited Dylan-by-way-of-Springsteen romp through “Changing of the Guards” by the Gaslight Anthem; the Carolina Chocolate Drops recasting “Political World” as a traditional fiddle song; and Bad Religion transforming “It’s All Over Now, Baby Blue” into a hard rock song without sacrificing any of its bitterness.

Conversely, those artists who fail tend to do so miserably, with large blocks of songs reveling in over-indulgence while also exposing the artists’ creative limitations. Some pretty gross offenses are committed; most dubious are Lenny Kravitz’s takedown of “Rainy Day Women #12 & 35,” Natasha Bedingfield’s coating of “Ring Them Bells” in a sickeningly sweet layer of pop sheen and Dave Matthews’ meandering live stab of “All Along the Watchtower” (given that no one’s come close to touching Hendrix’s classic, maybe it’s best to retire this song). Even some artists who should know better by now – witness Elvis Costello’s uninspiring turn on “License to Kill” – cannot bridge the gap between Dylan’s approach and theirs.

Is Chimes worth it if you’re a Dylan fan? Yes and no. Now and then there are real gems to be found – besides those mentioned earlier, Brett Dennen and Mark Knopfler each do a superb job on “You Ain’t Goin’ Nowhere” and “Restless Farewell,” respectively – but if you’re going for the whole package be forewarned that it skews toward the mediocre and you’ll probably give your “Next” button a serious workout. Purists might cry foul with how some of Dylan’s songs are treated (or mistreated) on Chimes, but at a minimum the album deserves some praise for encompassing most of Dylan’s career, even throwing in a few obscurities like “Outlaw Blues” and “Lay Down Your Weary Tune.” That these discs can be quite a chore to get through and might send listeners quickly scurrying for the originals to get the bad taste out of their mouths is unfortunate but also not entirely unexpected.