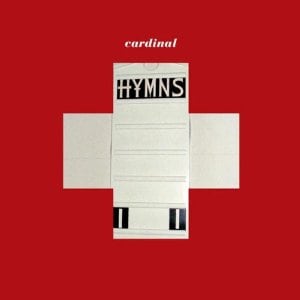 [xrr rating=2.0/5]This is a story of a band so long in fulfilling its promise that, days before the release of their second album, their debut’s Wikipedia page still bears the ominous descriptor, “This is the sole album of indie-pop duo Cardinal.” Not so, nerds. Eighteen years after the fact, Hymns looks to recapture the momentum of their promising debut.

Cardinal is Richard Davies and Eric Matthews, both of whom have forged solo careers since their last collaboration, 1994’s self-titled debut. It bore the standard markings of the decade: distorted guitars, underproduction, a disaffected flatness to the vocals and enormous JNCO jeans. Procedurally, Davies wrote the songs, and Matthews arranged, adding harmonies and instruments with Davies’ approval at each step. Since 1994, technology has certainly eased this once-laborious method; unfortunately, it can’t guarantee a better album.

Any recent mention of their debut employs larger-than-life superlatives followed by breathless anticipation of Hymns. The band’s own press kit, never a form known for understatement, calls 1994-Cardinal “arguably the best band in the world.” In 2012, they sound either fatigued or farcical and at all times zestfully bland.

Many lyrics are deplorably banal. “You wait/ and you wait / and wait and wait./ Then they tell you/ you’re Prime Minister now,/ Gordon Brown,” Davies sings on “Carbolic Smoke Ball,” a track whose mechanical rhythm guitar is only slightly more annoying than the feigned nasality on the vocals. “You’re the king, you’re the queen of rock and roll/ you have such a beautiful soul,” they rhyme on “Love Like Rain,” a sonic earwig possessing all the subtlety of grade-school poetry.

Worse, “General Hospital.” The song must be a joke, its tones as drab as hospital walls, its imagery so anesthetically literal that by the time the dying narrator croaks, “Nurse!/ Nurse!” you’re about ready to pull the plug yourself. Yes, perhaps these four minutes of superficial medical jargon (“Let’s take some of your blood”) and hazy piano thrums mimic the hopeless, foreboding wait of an admitted patient, but surely no one has ever wished a song sounded less fun and more like a terminal illness.

On the other hand, opener “Northern Soul” plays like an Americana Beatles, just tipsy enough to make you forget that the Beatles revival thing has been done to death since 1994. Along with that track, “Her” might best demonstrate what made critics crazy for them in the ‘90s: Davies’ and Matthews’ harmonies winding tightly, one a grungy drone and the other weightless melody. By far the best track, “Rosemary Livingstone” plays with that harmonious Lennon-McCartney sensibility just psyched-out enough to land somewhere between MGMT and Animal Collective.

Sometimes promising youngsters don’t grow up to be president. Sometimes second albums don’t measure up to their predecessors. Sometimes there’s too much reverb. Sometimes too many years pass and your style, once cutting edge, has become passé. Cardinal have perhaps been saddled by more expectations than two men can manage at the confluence of ‘90s nostalgia, unprecedented access to music and rampant musical expertise around all corners of the internet. Still, their better songs only make listeners yearn for a more consistent effort.