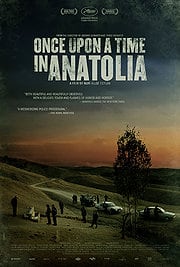 [xrr rating=3.5/5]Film has long been a medium drawn to analyzing crimes, whether romanticizing those who commit them or somberly depicting the effects they have on perpetrator and victim alike. Nuri Ceylan’s new work Once Upon a Time in Anatolia decidedly falls into the latter camp, turning a seemingly straightforward story about an argument that went horribly wrong into an almost meditative examination of the mundanity of life, forcing viewers to grow tenser and more anxious along with the characters.

That’s partially because Ceylan and cinematographer Gökhan Tiryaki choose to shoot the film in a daringly nondescript, tedious fashion. The film even starts with a dialogue free scene shot from outside of a window as the three men involved in the crime that gives the film its narrative thrust talk and argue. That scene sets the tone of Once Upon a Time in Anatolia, both in regards to the emphasis on conversation (though it’s unheard) and in the slow, methodical way that it’s framed. While the rest of the film treats us to a near endless amount of conversation that we are allowed to hear, it’s often viewed from afar, with little editing to break up the monotony of the subjects discussed, be they buffalo yogurt or the need for prostate exams.

Ceylan has fortunately assembled a game cast to act out this brutally glacial film, with police chief Naci (Yilmaz Erdoğan) and his comic foil “Arab” Ali (Ahmet Mümtaz Taylan) functioning as narrative instigators and tour guides for the Turkish countryside that we witness. But they also illustrate the impact of Anatolia’s biggest flaw, which is its lack of worthwhile character development; Naci and Ali have an immediately noticeable chemistry and within minutes it’s easy to tell what kind of relationship the two men have. But Kenan (Fırat Tanış) and Ramazan (Burhan Yıldız), the two brothers who committed the crime the film hinges on, are more indecipherable. We get the sense that Ramazan, who is mentally handicapped, has an unspoken loyalty to Kenan, but there’s not as much depth to their relationship as their should be, particularly given the major twist that is eventually revealed.

With that twist and the meticulously careful structure, Anatolia almost comes across as a Turkish Cache, with a similar message about how ugly acts from our past have a way of destructively entering our present. Once Upon a Time in Anatolia isn’t as jarringly effective as Cache but given the right frame of mind, its deliberate avoidance of typical narrative film devices and structures is noble even if it’s refusal to try make you care about its characters keeps it from being a truly great work.