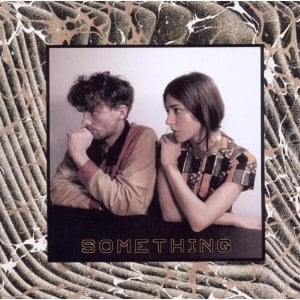 [xrr rating=3.75/5]Chairlift made their way onto plenty of iPods by doing an ad for one. Their 2008 single “Bruises,” from debut album Does You Inspire You, earned the band notability with its lovers’ duet of sweetly disguised sexual innuendo that Apple ran in colorful iPod Nano spots. Turns out that their black-and-blue love didn’t last; Aaron Pfenning left the band upon breaking up with his boo (and lead vocalist) Caroline Polachek. The couple had formed Chairlift — along with multi-instrumentalist and producer Patrick Wimberly — in the mid-aughts, and their debut album made its mark critically as well as commercially. After the breakup, Polachek got to keep the band.

The blandly-titled Something, embraces the hard-to-kill New Wave movement and, at times, authentically sounds as though it was plucked from the ‘80s. Despite being down a man (one who was apparently in charge of picking snappy titles), Chairlift doesn’t miss a beat and actually expands upon their sound. Their shift to a major label didn’t hurt. In today’s hipster music culture, there’s no novelty in efforts to tap into the ‘80s, but Chairlift transcends gimmickry to become more than simply another installment of nostalgic synth-pop.

In what could be considered both effective marketing and anti-climax, the band has already exposed the listening public to nearly half the album through various online avenues, and the single and opening track “Amanaemonesia” has already made waves on YouTube. In the video, Polachek performs a competent interpretive dance in a lime green body suit and a clunky animated face flickers in and out to create an effect reminiscent of videos from MTV’s infancy. The track itself is catchy — and rife with bass and reverb — but by no means is it the highlight of the album.

Unfortunately, the Brooklyn-based duo then squelches the pep by reverting to the snail-like pace of “Cool as a Fire.” The song may showcase Polachek’s gorgeous voice at its most pristine, but it slogs along at a somnambulant tempo that had me reaching for the skip button. Easing back to life, “Frigid Spring” opens with slowly-strummed acoustic guitar over hopscotching keys. Polachek’s voice floats to the treetops during this track and, in her higher registers, she channels Feist at her most birdlike. “Ghost Tonight” takes on the sparseness of a wraith, relying on steady drum and brief swells of somber keys, but Polachek’s siren intonations are placed front and center. In “Guilty as Charged,” Polachek sings as though cradling the mic with both hands, crooning, “Footprints in the carpet/ Cameras on the ceiling/ My baby’s swearing on the Bible/ He’s stolen golden earrings.”

And for all intents and purposes, that’s the end of the slow stuff. Drifting in on swaths of synth and bouncy drums pilfered straight from the era of big hair, “I Belong in Your Arms” is a head-bouncer. It leads into the Ladytron-esque intro to another single, “Met Before,” that billows with psychedelic synth, rumbling bass and cardiac drumbeats. With sweet-as-pie vocals and antisocially violent lyrics, “Sidewalk Safari” may be Something’s most sonically interesting track. Theremin-like keys couple with infectious drums and steady guitar to back Polachek as she sings, “All the bones in your body/ Are in way too few pieces for me/ Time to do something about it/ If you know what I mean.” And the final overtly-‘80s parting shot occurs in “Take It Out on Me” with its slaps of bass and sultrier vocals ceding to a chorus straight from the decade of excess.

Despite a reduction in personnel, Chairlift has cultivated its own trademark sound. By crafting a sophomore effort that blends quirk with class — and with the assistance of a major label — the band does more than reanimate the synth-pop of the past; they carry it to new heights. And that makes Something special.