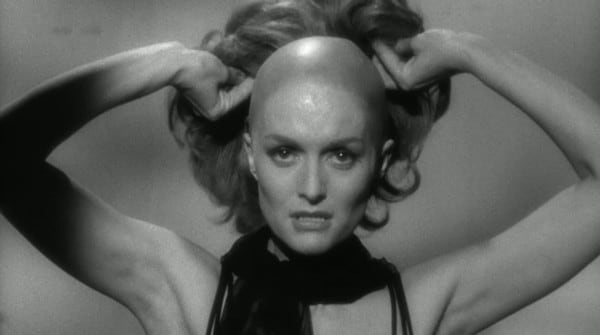 Released one year after Shock Corridor, perhaps the most characteristic film of his career, Samuel Fuller strays into Douglas Sirk territory with The Naked Kiss, a purple fable about society’s invisible borderlines. Opening with a bravura sequence involving a pimp, a wig and a seltzer bottle, the film seems set for a whole lot of craziness, but what actually follows is restrained, as much as a tale that features murder, child molestation and prostitution can be. The resultant weirdness, which is mostly played straight and close to the vest, is therefore much sneakier, making The Naked Kiss harder to appreciate than some of Fuller’s more bombastic material.

After establishing her ass-kicking bona fides with that great opening scene, Kelly (Constance Towers) abandons her career as a prostitute to start over, getting off a bus in the small town of Grantville. But first she plunges into one last, ill-considered dalliance with Captain Griff (Anthony Eisley), a local policeman and civic guardian who doesn’t want women of ill repute fouling up his hometown. He orders her to cross the river, where a brothel operated by Candy (Virginia Grey) dresses women up like sweets. Instead she stays, taking a job at a children’s hospital, eventually catching the attention of local millionaire J.L. Grant (Michael Dante), whose family founded the town. Griff can’t believe that Kelly has changed her ways, and begins plotting her destruction, convinced that Kelly is up to something suspicious. 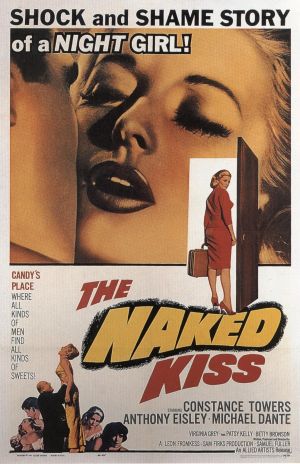 The Sirk connection comes not only in repeated visual nods to individual imprisonment, but the gaudy baroque touches that filigree Kelly’s ascension, including repeated fantasies involving flower petals falling from the sky. Her romance with Grant is the same kind of doomed fantasia that crops up in movies like Written on the Wind and All That Heaven Allows, a delirious reverie so perfect you know something will eventually go wrong. This comes through a shockingly creepy reveal, which throws another twist into the works and lands Kelly in prison, hemmed in by bogus testimonies from all her old enemies.

The surprisingly hopeful ending, with its half-ironic reliance on a child’s inveterate innocence, proves however that this is a Fuller movie through and through. Another clear indication is that, despite the cast of unlikable weirdos that surrounds Kelly, no one is written off or left as a stock villain. Her child molester husband speaks torturously of the disease which affects him, and despite the quickness with which he’s dispatched, it’s possible to read his defense to Kelly (“we’re both deviants”) as a plea for understanding rather than a condemnation. Candy, who makes her money by corrupting young women, is a monstrous figure, but also a twisted version of our female hero, a woman making the most of her limited opportunities. Even the crusty Griff eventually earns some sympathy. In one of the film’s most revealing scenes, Fuller shoots a jailhouse conversation to look as if he were the one behind bars, pointing out how he’s just as trapped in his role of exacting lawman as Kelly was in hers.

The Naked Kiss’ biggest achievement is the way it carves society into discrete vectors, using the director’s gift for depicting craziness via neat composition to depict a place where everyone is inside their own box. Once again, Fuller’s focus is on society’s outliers, but unlike Nick Ray’s romantically doomed characters, such people don’t always exist on the fringes. Everyone has a specific flaw, an internal loneliness, a sad story to share, and the characters here, whether they’re disabled children in their hospital beds or troubled young women considering prostitution, are hemmed in somewhere. With his usual devious acumen, Fuller sheds a little light on them, granting the measure of sweet release that makes his films, despite their purposefully rough edges, feel so warmly captivating.