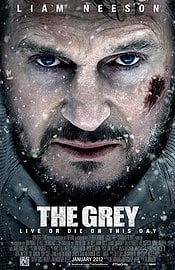 [xrr rating=3.75/5]The trailers for The Grey didn’t foster much hope, except for that final scene where Liam Neeson tapes broken airplane liquor bottles to his hands and charges head-on at a CGI wolf. I knew that was going to make a great Tumblr GIF. Otherwise, I figured this would be another Whiteout, where modern Hollywood incompetence sinks a potentially interesting story setting. That is, until I found out that Joe Carnahan was making the film.

Carnahan is the man. More accurately, Carnahan is an incredibly energetic filmmaker who seriously named his debut Blood, Guts, Bullets and Octane, snuck a berserk action/crime extravaganza into what seemed a really late-period Tarantino knockoff with Smokin’ Aces and directed The A-Team, which was totally boss. If he was making a movie about Liam Neeson fighting a wolf, I knew that was a movie I wanted to see.

But lupine brawls aren’t the point of The Grey, which follows drilling company employees stranded in the frozen wilderness after their plane crashes. Aided by the suicidal, mysterious Ottway (Neeson), the survivors attempt to find shelter against the elements when they realize they’re in wolf territory. Good thing that Ottway was the guy the company hired as a sharpshooter to protect the drillers from wolves. Bad thing that his rifle is covered in snow and thus unusable.

The script by Carnahan and Ian Mackenzie Jeffers (from Jeffers’ own short story) takes on a survival horror flair, as the remaining men drop like flies in the face of wolves and blizzards and the tyranny of nature. It’s like Final Destination if it were really, really cold. The result is a thematically meaty film where it’s not just man versus nature but man versus his own nature, as the group becomes like a rival pack to the wolves, complete with their own alpha male battles and growling standoffs with the enemy.

Carnahan, firmly established as a crazy person, only allows himself one really ridiculous moment, and it’s surprisingly not the airplane bottles thing. Mostly, he nails the harsh landscape of The Middle of Fucking Nowhere, which quickly becomes a character in its own right as wind blows and snow falls and the bodies pile up. And then snow piles up on the bodies. As for the wolves, most of the time they’re kinda obvious CGI, but that actually works in the film’s favor as Carnahan gives them a nigh-supernatural status, appearing and disappearing at will, their menacing glowing eyes prowling in the dark. Aided by cinematographer Masanobu Takayanagi, Carnahan shoots The Grey in a grainy, digital, often handheld style almost devoid of any non-eponymous color – except maybe red. Handheld digital cameras have a whole set of pitfalls mostly associated with excusing shitty cinematography by passing it off as “vérité,” but the pair know when to keep the camerawork silent, unobtrusive and often beautifully composed, and when to jerk the goddamn thing around to create a sense of chaos – people falling down hills, scrambling for safety and, of course, during the plane crash where our heroes’ troubles begin.

Neeson owns the movie as much as Ottway takes control of the situation. Part of my reservation about The Grey was my sense that, after Taken, Neeson was becoming the next Bruce Willis – an actor who hacks it doing near-self-parody of an earlier film personas – but I’m thankful to say that ol’ Liam plays the character identifiably as a walking ball of unspoken angst lurking behind leadership know-how, like a gushing gash wrapped in not-enough gauze. The rest of the cast is unrecognizable – even familiar faces like Dermot Mulroney and James Badge Dale – as they disappear into their roles under layers of blood and bruises and warm clothing, but the script lets them flesh out their parts enough for us to care when they inevitably die.

Save some narrative stumbles like flashbacks and the odd manipulative score piece, The Grey overall is an intense, solidly crafted film. But the best part of the film is that Carnahan and Jeffers never sell out to the audience’s base desires. Like an Old Testament God, The Grey is a mean motherfucker, right down to its stark, abrupt ending that will surely piss off audiences across the nation but makes me like it all the more.