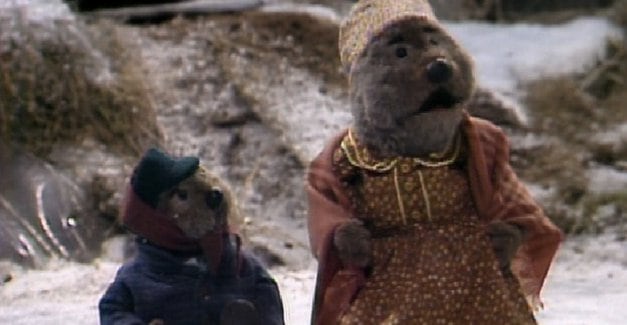 Well, another year of Yuletide holidays has come and gone, and to be honest, that’s completely fine by me. I’ve never been one much for Christmas related festivities, be they religious, secular or just plain present-grubbing in nature. As far as I can recall, even as a small child I found the concept of Santa Claus patently absurd and went along with it for the presents (although if any small children are reading this, it’s okay, I was just joking, Santa is totally a real person who judges your behavior mercilessly and rewards or punishes you accordingly). But one thing I did love about Christmas is the movies: from the lofty heights of It’s a Wonderful Life to the stygian depths of He-Man and She-Ra: A Christmas Special, I love them all. But one of the few Christmas movies of my childhood that I haven’t re-watched as an adult is Emmet Otter’s Jug-Band Christmas. That is, until now.

While the success of Disney’s recent release of The Muppets has brought back Jim Henson’s most popular creations into the limelight, it’s easy to forget how thoroughly the Jim Henson Company dominated children’s entertainment in the ‘70s and ‘80s. Aside from the Muppets and their pre-pubescent Baby equivalents, there was “Sesame Street,” “Fraggle Rock,” Labyrinth, The Dark Crystal, and a whole slew of television specials. While many of them were doomed to obscurity, like “Big Bird in Japan” or “The Tale of Bunny Picnic,” some managed to escape relative topicality, hence the lovely tale of Emmet Otter and his mother, first aired as a holiday special in 1977. I first encountered their story as a child of the 1980s on a CED Videodisc (for more information on the strange anachronism of Videodiscs, visit your local library, or more likely, search Wikipedia), and was immediately fascinated.

Based on a 1971 children’s book by Russell and Lillian Hoban of the same name, young anthropomorphic otter Emmet and his widowed mother live on a riverbank in blissful, bucolic poverty, doing laundry and odd jobs for their more well-off but nasty neighbors. They seem to spend their days rowing up and down the river in a town called Frogtown Hollow, singing folksy songs in harmony and reminiscing about the late Pa Otter, who was apparently a good-natured snake oil salesman with a penchant for homilies. Upon learning of a local talent contest MC’d by Mayor Fox with a massive cash prize of $50 (which, aside from inflation, indicates just how impoverished these otters are), which both plan to win and use to buy the other a fancy, store-bought Christmas gift. There’s a few subplots, like a last minute song substitution in the contest for Emmet’s titular jug-band and a pack of amusingly outdated (even in 1977) hoodlums that form a rock band called the Nightmare, which features a gravelly voiced, cape-wearing bear playing keyboards. Of course, that’s patently silly (bears traditionally preferring to play drums), but the story is pretty much a riff on “The Gift of the Magi” featuring animal puppetry.

Viewing Emmet Otter as an adult relatively unburdened by being distracted by cutesy animals (although the various furry guys are pretty damn adorable – there’s even a frog with pince-nez!), I was struck by two things. The first is one that never would have occurred to me as a child and probably not to any child that wasn’t terrifyingly observant and probably afflicted with severe OCD: the level of detail is amazing. From the costuming of the puppets (including tiny suspenders for Emmet that are only shown in one brief scene) to the clearly handbuilt little riverside shacks that are mostly seen in wide sweeping shots to the wild fur of a scurry of tumbling squirrels as they perform on stage during the contest, the sheer craftsmanship is astounding. As a child, I would never have noticed or appreciated the kind of work and eye for small things that a production like Emmet Otter requires, but as an adult, it’s one of its most arresting elements. This isn’t the laziness of rotoscoped film or endless looping backdrop theaters; it’s the dedication of true professionals putting something precise as clockwork together.

That level of detail carries over into how human and emotive these anthropomorphic puppets seem. In less apt hands, the story of an otter and his saintly mother could come off corny and saccharine, but the skill the Henson Company players brought to their work gives those bits of felt and fur true personality and empathy. Even their facial expressions are brought to life, not relying on wild gesticulation or clowning to keep the story along. When actual living humans can sometimes barely impress, these puppets are that much more impressive. Particularly when, objectively speaking, these otters lead a harsh, threadbare existence.

And that’s the other thing that struck me: Emmet Otter is a pretty depressing story, right up to a last minute twist. Throughout the course of an hour, the Otters reminisce about their beloved, departed family member, who barely managed to keep a roof over their heads at the best of times; they are cheated out of wages multiple times by neighborhood scolds; they try their very best to win the contest, sacrificing their livelihoods in the process, and yet they still lose. In short, the Otters have the game fixed against them from the very start. And while they manage to find lively, permanent employment in the end (while teaching a valuable lesson about the importance of complementary cooperation, of course), only their unrelenting cheer keeps this from being a deeply sad story. After all, even in defeat, the Otters have each other.