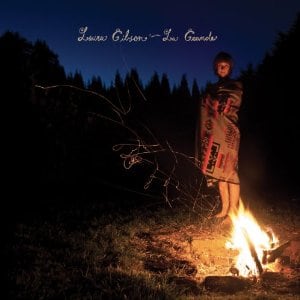 [xrr rating=3.75/5]La Grande, a small town pressed between eastern Oregon’s Blue and Wallowa Mountains on the Grande Ronde Valley plain, has a certain dingy charm to it. Bisected by Union Pacific rails, its downtown’s historic brick facades and cast iron cornices give way after several sparse blocks to hushed suburbs and big box retailers afloat in asphalt baths. Situated astride the Columbia Gorge-bound Highway 84 and with a modest population of 13,000, La Grande is mostly known as one of the Boise-Portland corridor’s sleepy stops – or as the town bills itself, “the hub of Northeast Oregon.” And it’s these as well as other hidden qualities of the town and region that serve as topographic blueprints and sociological touchstones for Portland-based (but Coquille, Oregon born) singer-songwriter Laura Gibson’s third record, the softly perambulating and aptly mantled La Grande, to build upon – to occasionally glorious results.

Due to enlistment of percussionists Matthew Rubin Berger and Rachel Blumberg as well as appearances from Calexico’s Joey Burns and the Decemberists’ Jenny Conlee, La Grande is a decidedly dissimilar creature from Gibson’s first two records, 2006’s If You Come to Greet Me and 2009’s Beast of Seasons. Though both provided substantial proof, in evocative lyricism and fragile folk-pop songcraft, as to why each could be appreciated in its own right, neither attempted the exuberant grandeur or ambitious leaps that fill La Grande. Gibson’s spider web-thin vocals remain but are this time underlined doubly thick by more precise and energetic arrangements, hissing AM radio static and punctuating bass drum and rim taps, as on the title track, La Grande’s opener and a sonic racehorse that rollicks forth with Gibson recalling a “pine-bearded hill” near which “still, to this day/ I can hear the whistle blow/ I can smell the sage burn.”

Like many of the album’s songs, the eponymous track enjoys a latter third devoted to a heavy-handed, dynamic climax played out in ghostly harmonizing, throaty backing vocals and wild(ish) instrumental abandon. For the most part, Gibson effectively leverages the slow builds into dramatic set piece endings, even when they can be spotted from as far away as rising columns of smoke on the horizon. On “Skin Warming Skin,” plaintive lap steel infusions and an acoustic tremolo pairing, added to spectral sighs and rolling rack toms, are sufficient to prevent derailing, and it’s the tension between the soporific and momentous that lends the record (and the town) its prevailing character. Among some of La Grande’s softer entries are “Milk-Heavy, Pollen-Eyed,” which offers up clarinet and a slow, focused steadiness wound tight around a somnambulistic rhythm that expands off like the valley’s grasslands, the swaying “Crow/Swallow” and the antebellum hymn-like “The Rushing Dark,” almost all hums and creaky fiddle.

Traces of homesteader gospel and church swing in “The Fire,” along with its nimble organ phrasing and forceful piano, leave it resembling an aped M. Ward tune (just as often itself some form of plagiarism – or at least cultural piracy – also, in a way). Bar lounge atmosphere, country swagger and dissonant reverb on electric guitar propel the otherwise poppy “Red Moon” into the same dichotomous tension the sun-and-showers approach on “Lion/Lamb” points toward, a breezy bossa nova beat juxtaposed against a thick veil of noise creeping in along distant margins (just as the carefree tone of the track is intentionally – and artfully – mismatched against Gibson’s admission, “I am not a lamb/ I am a liar”). The cramped croon of loping lullaby “Time is Not,” meanwhile, reflects quite ably La Grande’s meandering Route 82, which cantilevers perpendicular off the rail line the town grew to swallow in its 150 years and cuts eastward through farmland and dusty ranch tracts, eventually skirting majestic alpine peaks and tracking the picturesque Wallowa river through Hells Canyon, North America’s deepest river gorge. And closer “Feather Lungs,” bringing to an end the album’s arc from urgent Americana and old beet sugar mills (closed in the 1920s) mentioned in the title track to hollow, resigned words of parting (“We will leave our feather lungs as nameless as when we arrived”) and a sad sack bass riff wrought by “calloused hand” in those late evening hours when the entire work-worn burg turns in.

Parochial (almost by definition) and perhaps too monotonously wan in some few places but buoyed by each success and spirited flourish within its thematically cohesive but neat, discretely arranged miniatures, La Grande is like its namesake town more than the sum of its parts, even when those parts alternate in appeal, depiction and the degree to which they communicate a period in La Grande’s lifespan. For in treatment of every analog for Gibson’s compositions – early, rough-hewn settlement, the railroad era rush and bustle or the grittier, quieter realities of the town’s less economically viable present, shuttered antique shops and vacant sidewalks, combination Burger King/Shell and Walmart sited on (what else?) Walton Rd. and all – care shines forth as much as purpose. As with the music of recent tourmates Richmond Fontaine and current tourmates Cotton Jones, presentation frequently transcends subject (often, a tired town, a tired man, a tired family), and on Laura Gibson’s La Grande, La Grande, “poor in strength, but rich in spirit,” never sounded so good.