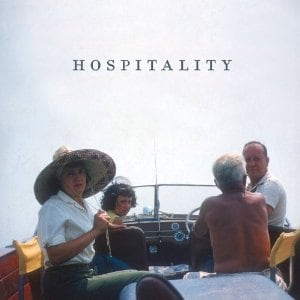 [xrr rating=4.5/5]It’s a bit early in 2012 to be calling anything “best” of well, pretty much anything, but since I’m a music critic, that’s kind of my job. And if I had to call out the best debut album of the year so far, it’d be New York-based band Hospitality’s eponymous album. After an EP last year and a trickle of advance buzz, the trio of Amber Papini, Nathan Michel and Brian Betancourt have released an album that is startlingly self-assured, poignant and lovely. Although it can’t be nailed down to one single genre, flitting between graceful rock, chamber pop and occasional rougher edges, suffice it to say nearly any track on Hospitality sounds tailor-made to fit on a Wes Anderson soundtrack. If that doesn’t sound appealing, this might not be the right album for you, but it should be for millions of others.

Each of the trio has multiple duties, Papini performing guitar and piano, Betancourt on bass and back-up vocals and Michel handling drums, flute and harmonica. But it’s as primary vocalist that Papini really dominates the group, her voice alternately strident and winsome. While she’s reportedly a Kansas City native, her voice has a distinctly clipped British tone (something that will no doubt be noted across the blogosphere shortly), a touch of something that’s neither quite here nor there. But while the affectation could become alienating or overly twee, Papini has enough charisma as a singer to pull it off, even without the songs to back her up. Fortunately for listeners, the 10 tracks on Hospitality are uniformly strong, without a single bum entry. They never sound deliberately pitched against each other or notably disparate, like a band that’s trying to prove that it’s a pony with more than one trick. But they also never get stuck in a single frequency, organic as the progression of the album is.

Hospitality opens with “Eighth Avenue,” the first of several tracks that seem to reference New York City. But more importantly, it’s demonstrative of the band’s non-formulaic approach to songwriting: it’s catchy without having an obvious hook; it progresses naturally from a lilting acoustic guitar to a sudden squealing electronic breakdown; it feels both sad and bouncy at the same time. Similarly, “Friends of Friends” opens with a thick bassline and a crunching guitar, only to switch gears into a horn-driven chorus anchored by Papini’s snotty, “But you’ve got friends that are new friends/ And friends that are old friends/ And friends…looking out.” Through the rest of the album, the trio touches on introspective melancholy as in “Julie” with its opening lyrics of, “Is it cold, is it snow, is it all the debt I owe?” against a pulsing bass, slick, cool pop on the wordless chorus to “The Birthday” and even pretty, lilting numbers like “Betty Wang,” an ode to a female colleague who doesn’t try too hard to be cool.

Although it’s easy to over-praise a band for a solid debut, it’d be equally as unfair not to acknowledge the confidence and strength of an album like Hospitality. As the saying goes, it’s all killer, no filler – an album that bears up to repeat listens without a boring moment. If Hospitality is the start to the music of 2012, you can count me in.