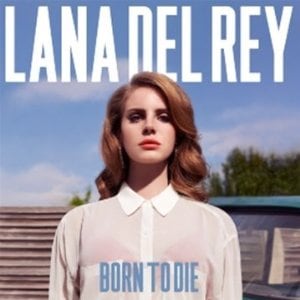 [xrr rating=2.75/5]It’s likely that no album this year will come with as much loaded expectation, both positive and negative, than Lana Del Rey’s debut record, Born To Die. She’s been the center of blog attention for months now, garnering significant attention following the release of the homemade music video for “Video Games.” Since then, it’s been a roller coaster of praise, ridicule and sexism – don’t fool yourself into thinking that arguments about authenticity and authorial autonomy would be thrown around with such ferociousness if the musician in question was male. The male musician has an endless amount of sexual personae (think Glam rock, punk, etc.), but the female musician’s sexuality is often interpreted as merely a glossy sheen for a lack of originality and talent. In a lot of pop/rock criticism, the female musician is judged based on her ability to shed her femininity and play with the boys. That’s part of why the reaction to Del Rey is so heated; it’s not often that we get an overtly sexual starlet outside the mainstream, invading the supposedly “authentic” indie atmosphere like a foreign virus. With the release of Born To Die, though, the discourse about whether or not she’s the recording industry equivalent of Frankenstein’s monster may shift and instead allow us to consume the music within a meaningful and insightful framework.

Born To Die’s opening stretch is its finest, mostly consisting of the familiar singles that have made their rounds over the internet for the past few months. The title track opens with a boastful string arrangement before making way for an echo-y, trip-hop beat and Del Rey’s husky delivery. It’s a fine vocal performance to kick the album off with, hitting the high falsetto during the chorus with relative ease before dipping into the darker tones of the verses. The ebb-and-flow melody is infectious, immediately catchy and shows that Del Rey has an ear for delivering luscious pop hooks. “Video Games” operates in the same vein, a gentle piano arrangement underpinning the syrupy vocal take. These two tracks revel in slowly building to big crescendos, and when the destination is reached, it’s emotionally and sonically rewarding.

“Blue Jeans” is a little punchier, the Morricone-tinged, spaghetti western guitars evoking the “gangster Nancy Sinatra,” that pesky moniker that has stuck to Del Rey. Though the lyrics still evoke the wimpy, defenseless female that has bothered many critics, the persona Del Rey adopts has an undeniable edge. There’s a disconnection between voice and subject matter that suggests the passivity may be constructed as a subversive power mechanism, rather than an inherent quality of female sexuality. “Off to the Races” is an evocation of the “Lolita” figure, as Del Rey sings the chorus with a pitchy, overtly-teenage sensuality while spouting lyrics about Bacardi, partying and the patriarchal power of money. “I’m your little scarlet/ Starlet/ Singing in the garden/ Kiss me on my open mouth,” she sings, with a knowing wink at both feminists and music critics.

Unfortunately, most of the appeal of the record ends with its earliest tracks. As the hour-long runtime rolls on, the often heavy-handed production, most of which can be attributed to Kid Cudi collaborator Emile Haynie, begins to overpower the vocals and lyricism which, for the most part, remain intriguing in their blend of purposeful agitation and exploration of gender roles. The echoing beats of “Carmen” and reverb-heavy approach on “Summertime Sadness” are overly indulgent, especially when covering up the lackluster songwriting of the latter track. Maybe not so coincidentally, this is where Del Rey is at her weakest as a vocalist. Her dipping and diving vocals sound contrived alongside the stale arrangements; the opposite of the evocative timbre of the takes on “Video Games” and “Blue Jeans.” “Dark Paradise” hammers home the dark chamber-pop atmospherics, but by this point, it starts to sound derivative, as if the whole record has one narrow formula for producing beats and melody. This is why “Million Dollar Man” is a nice surprise tucked away near the end of the album. Instead of straining into vocal acrobatics, Del Rey delivers a straightforward, powerful vocal take over top of a relatively bare (in the context of this record) arrangement. It’s a small gem of potential, a tiny hole in the glossy coating that exposes the talented pop songstress at the core.

Considering Born To Die – not just the album itself, but all the fuss, arguments, dichotomies and hype it represents – is a product of a post-everything culture of disposability and knee-jerk criticisms, maybe it’s no surprise that this record is as diametrically conflicted as the discussion surrounding its creator. At its worst, it’s an overstuffed, indecisive set of ideas with a bag of production tricks that doesn’t quite suit the undeniably magnetic vocal performer at its core. At its best, though, this is a record that longs to toy with gender politics, perceptions of sexuality in music and the line-in-the-sand alienation that still goes on between Pop and Rock.