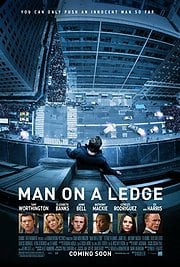 [xrr rating=1.75/5]As much as Oscar Night montages want you to believe cinema is a magical medium that dazzles and delights, some movies are simply made by assholes. There’s no other explanation for the existence of Man on a Ledge except that a producer who wanted to make money off of movies decided that a movie needed to be made in order to make money. So he hired a writer who wanted to be paid to write a screenplay. To bring said script to life, they sought out someone who would gladly accept payment in exchange for being on set every day and making sure that actors said the right things in front of cameras. How about the documentarian who brought us Ghosts of Cité Soleil? After all, shooting fake people has got to be way easier than shooting real people.

Fake person Sam Worthington plays Nick Cassidy, an Ex-Cop Imprisoned for a Crime He Didn’t Commit. To prove that he’s only really guilty of possessing an unconcealed Australian accent, he escapes and uses his newfound freedom to step out onto the ledge of a hotel in the middle of Midtown New York City. Once the Gruff but Reluctantly Compliant Supporting Cop (Edward Burns) arrives, our hero demands the attention of a Down on Her Luck Cop With the Emotional Baggage of a Thematically Important Case (Elizabeth Banks). Of course, in trying to talk him off the eponymous ledge, she starts to believe in Cassidy’s innocence. All the while insensitive TV news cameras roll (watch out for Kyra Sedgwick as Field Reporter Scrounging for a Scoop!) and Loudmouth New Yorkers are loudmouthed.

Unbeknownst to the world, this public suicide attempt is a distraction so that Scrawnier, Shaggier Little Brother (Jamie Bell) and his Hispanic Girlfriend Who Curses in Spanish (Génesis Rodriguez) can stage a heist that will incontrovertibly prove our hero’s innocence. Which sounds counterintuitive, but they’re robbing an Evil Businessman Who’s Recently Moved into Real Estate (Ed Harris) so we know where our narrative allegiances lie. Meanwhile, is our hero’s Ex-Partner with a Secret (Anthony Mackie) clandestinely working against him? Also, is that an overly affected Nu Yawkuh accent coming out of Head of This Police Operation (Titus Welliver) or did his tongue fall asleep?

The man responsible for publicly exhibiting a superhuman mastery of the Find and Replace function in Final Draft is Pablo F. Fenves, most famous for being O.J. Simpson’s neighbor in 1994 and later ghostwriting Simpson’s hypothetical murder memoir If I Did It. Almost admirable in his refusal to put an original thought to paper, Fenves defiantly throws in every trick in the cop movie book, from “He could be sipping tequila in Mexico by now!” to “Keep that up and I’ll have you [doing menial police work] in [undesirable but nearby locale]!” And you better believe the girlfriend reveals facts about her past that cause a lover’s quarrel mid-caper! On the other hand, Fenves does exercise restraint. A case gets blown wide open, but nobody claims that they’re going to blow this case wide open.

Most infuriating about Man on a Ledge is its depiction of New York. The NYC police standoff is territory covered by much better films, namely Dog Day Afternoon and Inside Man, both made by people who understand New York City as a real place that’s home to countless diverse human beings. Instead, Fenves, armed with the insight of someone acutely from Los Angeles, writes a scene in which the crowd below shouts for our hero to jump while he shrugs, “New Yorkers, huh?” and drops gems like “You hit like a girl. Are you from New Jersey?” When a crazed homeless man in the crowd started shouting “Attica! Attica!” I was suddenly glad Sidney Lumet is dead.

To its credit, Man on a Ledge is competently made. Everyone involved in the actual production came to work and did their job to the best of their technical abilities. So, there are credits at the end and everyone is still wearing the same shirts when the scenes cut. Which brings me to a possible answer for why this movie exists. Consider that the economy isn’t in a great position right and one of America’s biggest exports is entertainment. Now, realize that Man on a Ledge has to be some kind of revival of the Works Progress Administration. Just, y’know, instead of hiring dudes to dig and then fill up holes all day, they’re actively keeping employed America’s key grips, costumers and character actors.