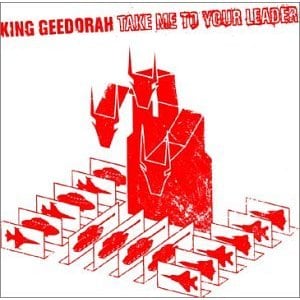 I had the most whacked out dream the other night. I was chilling at Chicago’s legendary jazz club The Green Mill. Alto saxophonist Cannonball Adderley and pianist Red Garland, both long deceased, were on the bandstand. Rapper MF Doom unexpectedly emerged from the audience and started spitting rhymes over Adderley and Garland’s soulful jazz. Next to the bandstand was a big-screen TV playing old Godzilla movies. Suddenly, a voice came over the loudspeaker, interrupting the music, saying that the audience would have to evacuate the club immediately. As the crowd poured out into the streets of Chicago’s Uptown neighborhood, I heard distorted voices saying, “Follow the light!” and “The final hour is approaching for the people of earth!”

Now, you could probably do a revealing Freudian analysis of this dream. Or you might question whether the potent Mexican food I ate before bed was responsible for these oddities. Personally, I think the fact that I was listening to King Geedorah’s 2003 underground masterpiece Take Me to Your Leader as I drifted off to sleep had something to do with it. It’s perhaps one of the weirdest rap albums of the past decade, yet one of the most endlessly fascinating. It deserves a second listen.

King Geedorah is one of the many stage names of rapper/producer Daniel Dumile, best known as MF Doom. Take Me to Your Leader is a kind of concept album that draws upon the mythology of the Toho Studios’ Godzilla films. Dumile takes King Geedorah as his name in reference to King Ghidorah, a three-headed dragon who torments earth. MF Doom’s role on the record is primarily as producer. Since he only raps on two tracks, he relies on a whole troupe of fellow rhyme masters, many of whom playfully embody the personas of other Godzilla characters, to rock the mic. Fortunately, these MCs are all up to the task. The variety of rapping styles and approaches is one of the record’s biggest pleasures.

The thing that really keeps it spinning, though, is MF Doom’s trippy, pleasantly convoluted production. Drawing upon sources as varied as ‘60s soul ballads, jazz standards, a Hall and Oates tune and the theme music from David Lynch’s TV series “Twin Peaks,” Doom keeps us on our toes. On top of all these musical samples, we hear snippets of dialogue and sound effects from the Godzilla movies. The track “Monster Zero” has no rapping, but rather consists only of copied-and-pasted film samples which tell the story of Geedorah’s shocking terrorizing of earth. You would think that the use of such a plethora of samples, both spoken and musical, would result in a disjointed, even maddening, listen. It’s remarkable, then, how chill and relaxed the record feels. Despite the menacing dialogue about the destruction of the earth and the frequent changes in tempo, mood and texture, one gets more of a vibe of sitting on the couch with friends watching B-movies than experiencing the apocalypse.

At this point you might be thinking, “Dang, this record sounds like the kind of thing reserved for comic book nerds and film geeks.” I’m here to tell you that I have never seen a single Godzilla movie and have a general apathy about the threat of three-headed monsters towards humankind. Believe it or not, Take Me to Your Leader, despite its purported subject matter, has an oddly universal quality. MF Doom and company invoke the human feelings of love and fear even as they rap with their tongues in their cheeks. “Next Levels” is a genuinely inspiring song of self-improvement, with Lil’ Sci rapping, “Take your life to next level or remain no more.” “One Smart Nigger” is a bold, brilliant satire about race relations in America that uses only TV and film samples to carry the narrative.

A lot of really good hip-hop came out in the past decade. Having said this, none of it sounded quite like King Geedorah. Dumile made a record that has a playful, fun concept behind it, yet still has important things to say, an all-too-rare combination in modern rap. The record’s been around for almost 10 years, and I feel like I’m just now starting to figure it out. MF Doom, in discussing the album’s treatment of racism and other societal woes, once said, “All these insecurities are within us.” Rest assured, Take Me to Your Leader is about more than just the monsters we find on the big screen and within the pages of comic books. It’s about the monsters we find within our own dark souls.