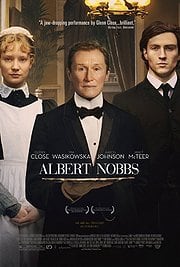 The best I can say about Albert Nobbs is that it isn’t half as offensive as I thought it would be. An award-baiting film that combines period drama, working-class despair and Hollywood-liberal concern for gender identity could have made Crash look as nuanced as The Rules of the Game. Happily, the film skirts any overly self-absorbed statements about which it knows little, and its touches of sexuality are the most entertaining moments. Not many period films can so casually show acts of cunnilingus or almost ironically “inhibited” homosexuality without trying to seem modern, and director Rodrigo Garcia does a fine job of presenting such things as a natural occurrence of the time, which of course they were.

Unfortunately, Albert Nobbs is such a tedious slog that I nearly found myself wishing for some clueless Hollywood offense just to have some kind of reaction at all. From the opening shots, banal compositions of an Irish hotel scored to light piano patterns, this is a miserably dull movie. Maybe that’s the point, for Albert Nobbs is, after all, about a woman attempting to pass as a man by drawing as little attention to herself as possible. Glenn Close, who finally brought the play to the screen after performing the lead role onstage in 1982, plays Albert to such an unassuming degree that the butler can not only fail to make a mark upon those who work with him but the audience as well.

Surrounding Albert is a bog-standard view of Ireland as a land of misery and woe. The hotel matron is a steely old matriarch who delights in guilting her employees as if they were her disobedient children. A be-sooted young rake by the name of Joe (Aaron Johnson) stumbles his way into work as the hotel’s plumber, where he proves just a bit too charming to the maid Helen (Mia Wasikowska). This being Ireland, Joe soon reveals himself to be a violent drunk who demonstrates the hilarious inefficiency of religious-taught abstinence. Albert dreams of opening a tobacco shop in a back alley in Dublin, a goal almost offensive to the young generation who want nothing more than to escape from desolate Eire.

Yet Garcia never particularly makes his Ireland feel like the decaying spiritual wasteland that it was for so long. For a city ravaged by hunger, poverty, industrial pollution and disease, Dublin looks pleasantly hospitable, while the broad character strokes come across as too two-dimensional to capture the complexities of Irish self-entombment. Garcia’s idea of embodying the dour, static quality of Irish life is to tint the frame a bit dark, which adds some texture to interior shots but hardly conveys the full force of Ireland’s noxious cloud of Catholic guilt and pre-Partition imperial oppression. It may surprise some that John Banville, a celebrated Irish novelist, co-wrote the screenplay adaptation, given how little of Ireland makes its way into the film.

But like I said earlier, its flashes of frank, unforced sexuality are welcome respites from the boredom of the rest of the movie. Janet McTeer appears early on as another woman disguised as a man, but where Albert meekly hides from others, Hubert takes bolder delight in a masculine role. McTeer plays Hubert with a perpetual smirk and a forthright tone that wrests the entire picture from Close’s hands in seconds. When a later event hampers Hubert’s vivacious charm, a scene of the two cross-dressed men stepping out briefly as women for the first time in decades borders dangerously on the interesting, not for Close’s Oscar-reel release but the look of utter discomfort and chafing that never leaves McTeer’s face. Even more than Albert, Hubert is used to being a man, and McTeer’s commanding performance demands to be the real lead of this otherwise expressionless feature.

Though set in Ireland, Albert Nobbs reminds me of Eddie Izzard’s old bit about English films always being so low-key and stuffy; I kept waiting for someone to testily confront an unexpected visitor with, “What is it, Sebastian? I’m arranging matches.” Someone should have told Close that a passion project should have some, y’know, passion in it. Albert’s story has the potential to be incisive, poignant and aching. Instead, it proves to be a character study so thin you’ll be hard-pressed to say anything about him at the end that wasn’t already given at the beginning.