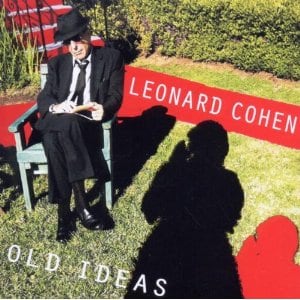 [xrr rating=3.75/5]Only a handful of artists are courageous enough to write a song referring to themselves in the third person from the perspective of God. Leonard Cohen, a veteran poet and singer-songwriter if ever there was one, gets away with it. It helps that “Going Home,” the opening track from Old Ideas, Cohen’s 12th studio release and his first LP since 2004, is noticeably self-deprecating. “I love to speak with Leonard,” Cohen croaks. “He’s a sportsman and a shepherd/ He’s a lazy bastard living in a suit.” Apparently the Almighty gives Cohen dictation in a similar manner as Scottish novelist Muriel Spark once claimed. Our speaker states proudly that Leonard “does say what I tell him.” Thankfully, he’s aware of how small he is in the grand scheme of things, since he “knows he’s really nothing/ But the brief elaboration of a tube.”

How you respond to these lines from “Going Home” is a good indication of whether or not you will buy into Old Ideas. If you find the combination of pathos, personal spirituality and humorous humility intriguing, you’ll probably dig this record. If you find it a little cheesy and overly self-conscious, you might want to stick with the many culturally ubiquitous versions of Cohen’s “Hallelujah.”

Personally, I can’t help but have great respect for Cohen’s artistic vision, one that has remained remarkably consistent for more than 40 years. As the record’s title suggests, there’s nothing particularly novel about this release when compared with the artist’s previous works. He’s still touching on the same themes of relationships, Judeo-Buddhist theology and sexuality that he did on his 1967 debut Songs of Leonard Cohen. At age 77, I don’t really demand that Cohen break new ground. I’m content to hear him tell some of the same stories again and again. They’re just that good, especially when they’re delivered in that raspy, grandfatherly tone.

At least four of the “stories” are masterpieces that demand to be ranked with such Cohen classics as “Suzanne” and “Joan of Arc.” The above-mentioned “Going Home” is poetically adventurous and musically potent. On the jazz-laced “Anyhow,” a desperate ex-lover bellows, “I know you have to hate me/ But could you hate me less?” “Crazy to Love You” puts the full power of Cohen’s songwriting chops on display, since the tune features just the singer’s voice and acoustic guitar. “Darkness” is a bona fide blues number, with the repeated melancholy assertion, “I caught the darkness, baby/ And I caught it worse than you.”

As much as I connect with the songwriting on Old Ideas, I’m a bit disappointed by some of the production choices. Several tracks feature string and wind sounds played on a keyboard rather than the authentic instruments. We have a synthy violin on “Going Home” and a digitalized trombone on “Anyhow,” for instance. I understand that Cohen has been developing a distinctive “European-folk, cabaret” texture lately. Perhaps the digital instruments are a deliberate artistic choice to invoke a spirit of theatricality. Nevertheless, these electronic artifices distract me from Cohen’s organic, authentic voice.

These sonic sins are quickly forgiven in the face of the songwriter’s relentless grace and wit. I’m not sure that you have to be familiar with the artist’s earlier work to “get” these songs, though it probably helps you appreciate them all the more. There are very few careers like Cohen’s in the annals of modern music. His trek from Canadian poet to treasured singer-songwriter is exceptionally inspirational. His ideas may be old, but I get the sense that he has much more to tell us.