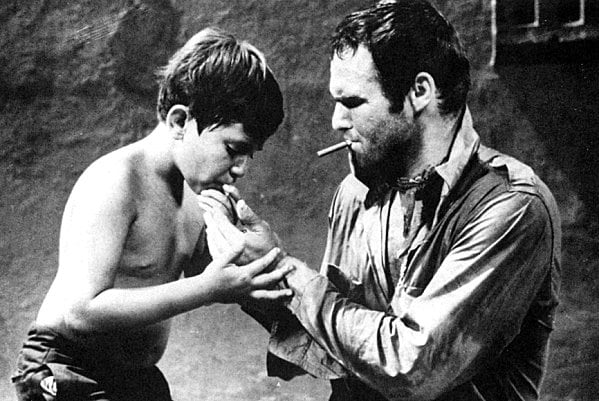 As far as Samuel Fuller was concerned, he never directed a movie called Shark! He’d probably insist that he made a movie called Caine, but that was never released, certainly not as he intended. It was just one more indignity in a career that had a few of them.

When Fuller was handed a script that Ken Hughes had adapted from the Victor Canning novel His Bones are Coral, it had been quite a while since the director had actually presided over a film. His prior work, The Naked Kiss, may now be considered his finest masterpiece among certain cineastes, but it was not a box office success at the time. That combined with the continually shifting fortunes of studios as the entire foundation of the movie business was rattled by the changing times combined to keep Fuller’s efforts from the big screen for five years, longer than at any point since he made his debut in 1949. He did a lot of writing, tinkered with several projects that never quite came to fruition and drew his steadiest paychecks directing several episodes of the now forgotten western TV series “Iron Horse.” So even though he probably had a sense he was dealing with some shady operators who were trying to produce this cheapo action movie to be filmed in Mexico, Fuller grabbed the chance to work on a movie project again.

He reworked the screenplay to suit his own sensibilities and retitled it Caine, named after the lead character, a destitute gun runner working whatever angles he can to get out of a small Sudanese town. Fuller wanted to play with some of the crime film tropes that he himself helped establish, positioning the characters in ways that were unexpected and building the plot up to a conclusion marked by a dizzying number of double-crosses. Burt Reynolds, then best known for extensive work in television, was cast as Caine and Fuller filled out the rest of the roles with suitably craggy and agitated character actors, including five-time Oscar nominee Arthur Kennedy as a boozy doctor. 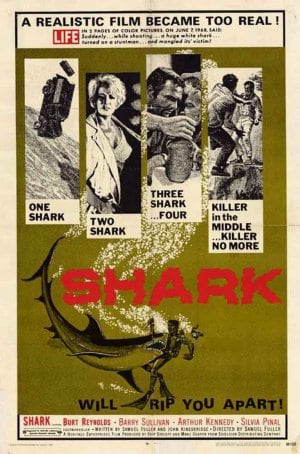 That resulting film was shot by Fuller, but the finished product didn’t belong to him. Producers Mark Cooper and Skip Steloff were apparently dissatisfied with the cut that Fuller delivered, so they took it and reedited the whole thing. They also changed the title to Shark! to capitalize on expected interest in the underwater scenes that placed stuntmen in scuba gear next to real man-eaters (to use another title that was slapped on the movie at one point). When Fuller saw what they had done with his work, he demanded that his name be removed, and it’s no mystery why. Shark! is a colossal, formless mess marked by abrupt edits, awkward cutaways and a pacing that suggests it was assembled by someone who was only guessing at the length of the individual scenes they taped together. The whole thing is cheap and slapdash, starting with the opening credits in big mustard yellow letters that make it look like it’s an episode of “Mannix” grinding to life.

Plenty of the film’s problems can be attributed to meddling, but Fuller has to own some of the wreckage too. The dialogue is strained throughout, which could charitably be theorized as an attempt by Fuller to send up the patter of the hard-boiled genres he helped pioneer, but it’s more likely thanks to a little rust on Fuller’s typewriter. It doesn’t help that Reynolds delivers most of his lines with a nonchalant mumble that seems intended to ape the naturalistic cadence of Marlon Brando. Reynolds has had his moments in his career, few and far between as the may be, but he’s no Brando, and he winds up coming across as sleepy and occasionally as a disaffected dullard. Still, no one could or should be expected to make a dialogue like “Back in the ‘States, skin diving has practically replaced baseball” sound like something a reasonable human would say.

At another point, a character describes a scheme as “crazy as flying a plane while you’re building it.” The entirety of Shark! has the feel of people taking just that approach, and it is indeed crazy. Fuller was in a rough place in his career and it shows in the film. Even if some of the significant problems didn’t bear his signature, the fact that he had so little control of the final piece tells its own story. Fuller had a strong, distinctive cinematic voice, but the system was working mighty hard to prove that it could be effectively silenced.