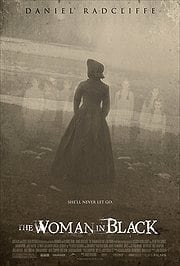 [xrr rating=3.0/5]While at our worst we’re a species that spends most of its time bickering over stupid shit, I think we can all agree that old-timey stuff is fucking scary. There’s this creaking metal cruelty to stuff made in the bygone eras long before kitsch was a thing and even longer before everything was made of plastic that makes a child’s toy seem not that far from a Victorian torture device. The sound of rocking chairs, giant old mansions full of dusty paintings, black and white photos of dead people, uncanny valley-exhibiting wind-up toys with repetitive robotic movement and plinky music box tunes do roughly 90% of the boogeyman’s work, and they all show up in The Woman in Black.

Adapted from Susan Hill’s novel by the ever-promising Matthew Vaughn collaborator Jane Goldman, The Woman in Black follows big-city lawyer Arthur Kipps (Daniel Radcliffe), whose job sends him to a far-off English village. After a few requisite scenes to show that 1) Nobody wants him in town, like, at all and 2) The status quo of the villagers is “trembling fear,” Kipps’ work takes him to a big, spooky house inconveniently located at the end of a long and winding dirt road that gets covered by the tide for hours at a time.

Inside, Kipps spends a few too many scenes walking around the house verrrrry slowly whenever he hears a strange noise, sifting through countless violently scrawled, backstory-revealing letters and eventually figures out that there’s a link between the town’s epidemic of gruesome child suicides and the ghostly darkly clad woman who shows up every time there’s a musical sting. Also, a local aristocrat (Ciarán Hinds, master of the permanent grimace), the only man to befriend Kipps, lends him a dog helpfully trained to bark at anything spooky.

Once Kipps does the math and devises a plan to put said ghost at rest, we realize it’s a standard potboiler sort of affair, but one delivered with enthusiasm – as one might hope of a modern-day Hammer horror production. A lot of the film is remarkably tense thanks to Goldman and director James Watkins’ understanding of how fear works. It’s hard to be scared when two people are having a conversation, but once you’re traversing hallways in a dark house by yourself, time slows down and nightmare lurks just around the corner. There’s a bit more in The Woman in Black’s case: the creepy music starts and the camera traipses along with you, letting the tension rise and rise before delivering scares at the rate of jokes in a Judd Apatow production.

Even better is that they’re some surprisingly effective scares, of which only a couple are fake-out scares. Even then, one of those fake-outs involves a crow, a reasonably scary bird. The film actually works as a horror movie, which is really impressive for the film’s rating – I generally call bullshit on PG-13 horror movies, but The Woman in Black brings the goods without the feeling of holding back to get sweet tween money.

Most of the actors in the film are hard to talk about, as we spend a majority of the running time alone in various spooky rooms with Kipps, but suffice it to say that the cast does a decent job of being English villagers that shoo their kids into the house while glaring at out-of-towners.

Which leaves me more room to talk about how 22-year old Daniel Radcliffe is distractingly miscast as Arthur Kipps, a widower with a four-year-old son. Now, I know that a 22-year-old in Period Piece England doesn’t remotely resemble a 22-year-old in the year 2012. But there’s still a giggle-inducing incongruity when the kid who just got done playing a teenager in wizard school is suddenly in nice lawyer duds, sipping on brandy across from a man nearly thrice his age. Try as he might to look angsty and tortured to distance himself from all that Harry Potter stigma, Radcliffe’s still got the face of a newborn babe, and it’s hard to shake that feeling of film school kids unable to find an age-appropriate actor on Craigslist. Even someone a couple years older like Jamie Bell would have worked significantly better in the role.

Despite inappropriate casting, a surprisingly overlong feel for a 90-minute movie and an ending that doesn’t really satisfy on any term (you know how these things end, let’s leave it at that), The Woman in Black still manages to leave a decent impression, provided you can jibe with the a more classic-style horror movie that relies on atmosphere and tension over gore and music video slickness.