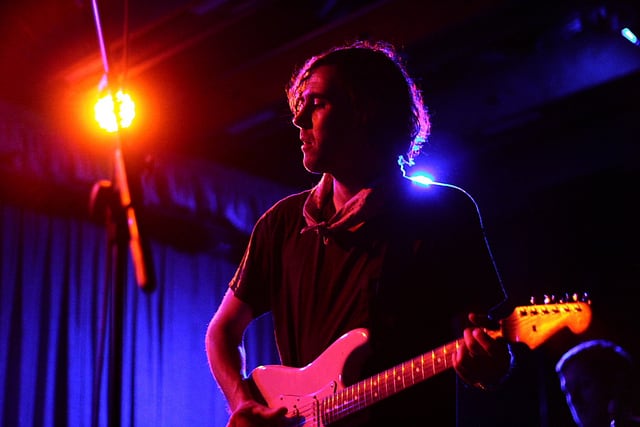 After “Love Thine Enemy,” the opening tune of Cass McCombs’ set at Chicago’s Lincoln Hall, the performer asked the sound technician, “Is there any way you could turn it all up? It’s so quiet.” Perhaps inadvertently, McCombs provided an apt description of his own show. It was truly one of the most subdued concerts I have attended in some time.

This is not entirely surprising or disappointing. McCombs is known for creating subtle, unassuming tunes that inspire contemplation rather than booty shaking. His poetic power lies in depicting the ordinary moments of life, such as coming home after a long time away and noticing all the changes or realizing for the first time that you love someone as more than just a friend. Despite his sometimes mundane subject matter and familiar musical elements, his songs feel fresh because of his ability to turn a phrase unexpectedly or insert a surprising chord change into an otherwise predictable progression. These talents were on display at Lincoln Hall, as a small, but appreciative, audience took in McCombs’ art.

McCombs is known for eschewing certain “rock star” conventions. He has a pronounced dislike for the spotlight, which was evident from the stage setup. McCombs and the four musicians who shared the stage performed in front of a sparkling, backlit screen. There was no spotlight, so the band was only visible in silhouette. I could see the audience members’ facial features better than the musicians’. McCombs was notably quiet in between tunes, and there was no encore after the final song. The audience responded to the show’s overall mellow tone by echoing the silence. I thought I heard a pen fall to the floor during one of the concert’s most hushed moments.

Another expectation that McCombs resisted is playing tunes primarily from his most recent records. Only one song was taken from each of the 2011 LPs Wit’s End and Humor Risk. The set list represented each of McCombs’ previous records somewhat equally, with a few unreleased tunes thrown into the mix. The restrained texture was consistent throughout, but the subtle variations in tone and groove made for an interesting listen much of the time. From the hypnotically repetitious lead guitar lines of “Prima Donna” to the twangy pedal steel of “Buried Alive,” the band gave McCombs a dynamic foundation upon which to project his small, yet poignant voice. On “Dreams-Come-True-Girl” and “Harmonia,” the band members took extended, jazz-inflected solos, elevating the energy level a bit.

For a Sunday-night, mid-winter show, McCombs’ brand of humble storytelling worked just fine. I was excited as anyone to hear him play “County Line,” one of last year’s most ubiquitous indie tunes, near the end of the concert. The song’s deliberate tempo, even slower than the recorded version, seemed to fit the night’s soft moods. I didn’t feel like I walked away with any new feelings or insights about Cass McCombs, but I’m not sure that I needed to. I respect him for his artistic consistency.

Ironically, the first opening act, Frank Fairfield, was more animated than McCombs with just his voice and instrument. He played through a series of old-timey banjo and fiddle tunes while stomping his foot exuberantly on the stage to keep time. While he was also quiet in between songs, often shaking his head at his difficult-to-tune antiquated instruments, he put all of his passion into such timeless folk tunes as “Little Liza Jane” and lesser known numbers like “Poor Benny,” a narrative about a boy who goes to a pub in search of his father to deliver the news that his brother is dying at home.

After Fairfield’s all-too-brief set, the audience crowded towards the stage a bit perhaps in expectation of McCombs only to find that poet Gabriel Wallace was first going to read some darkly humorous verse. The crowd was clearly not quite in the mood to hear a spoken word artist, but his deadpan delivery style helped set the mood for McCombs’ solemn performance. Anyone who came to Lincoln Hall hoping to rock out was disappointed. But, those looking to see earnest artists—whether an old-timey fiddler, a quirky poet or an indie singer-songwriter—quietly pursuing their passions, walked away happy.