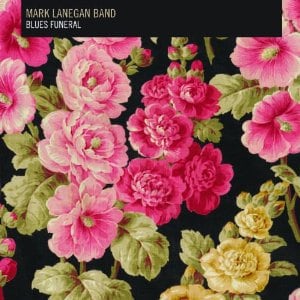 [xrr rating=3.5/5]As its name suggests, Blues Funeral is a grave album, loaded with references to death, dying and various other manners of finality. Although Mark Lanegan remains, however unfairly, regarded more for the excellent set of albums he recorded with Isobel Campbell than for either his Screaming Trees or later band efforts, Blues Funeral is a solid entry in his catalog and one whose stark subject matter lends itself well to his band’s style. In the same way as 2001’s Field Songs, it shares a thematic space with both classic American folk and blues, but explores these themes in much darker, and usually more aggressive, terms.

The album opens with “The Gravedigger’s Song,” a menacing track whose gothic demeanor and half growled/half whispered vocals – by now Lanegan’s voice has grown more cragged and creased than an old catcher’s mitt – form the basis for most of what follows. The crow “flying eight miles high/ over wire and wood,” freshly-dug graves and dying magnolias are paralleled frequently as the album progresses and also show Lanegan’s ability to create songs whose scope is quite focused but never excessively narrow. Thus, the rising muddy river of “Bleeding Muddy Water,” the foreboding winter of “St. Louis Elegy,” the dirt and clouds of “Harborview Hospital” and someone standing on a sidewalk in the rain on “Deep Black Vanishing Train” all reveal themselves as essential components of the larger themes that unify most of the album.

Regardless of whatever effects time and, one suspects, hard living have had on Lanegan’s voice, he squeezes the most out of it, particularly on the contemplative “Gray Goes Black” and “Phantasmagoria Blues.” A slow, fatalistic song that includes such niceties as slashed wrists and electric chairs, “Blues” finds Lanegan’s vocals carefully paced and devoid of their typically guttural quality. It’s equally compelling when Lanegan works up a few grunts and groans, as he does on “Leviathan” and on most of the album’s front half. His voice is far from traditionally pleasant, but when it comes to using his voice to convey a certain mood, Lanegan is masterful.

A handful of songs feel like haphazard toss-offs designed to pad the album’s running time or maybe give Lanegan an opportunity to play around. “Quiver Syndrome” is little more than just another generic guitar-driven song Lanegan could probably churn own by the boatload if he was so inclined. The like-minded “Riot In My House” is full of fracas but isn’t remotely convincing; it plays like a dusty rock song dug up from the past. “Ode to Sad Disco” is exactly what you’d expect from that type of title: a synth-heavy, couple-minutes-too-long lament that not even the sinister appearance of a diamond-headed serpent can save. Still, on Blues Funeral Mark Lanegan and his band are generally able to zero in on very serious topics and keep them from sounding like clichés. It’s a dirty, drunken and ultimately depressing world that Lanegan puts forth on Blues Funeral. These songs might kill a listener’s spirits and rattle the nerves, but that’s not necessarily a bad thing.