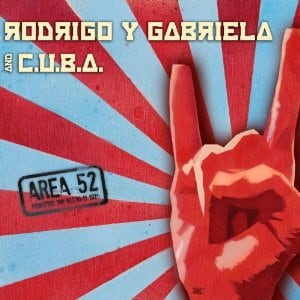 [xrr rating=3.25/5]Area 52 is the fifth studio album from the duo of Rodrigo Y Gabriela, but it can also be taken as the latest entry in their ongoing effort at grappling with and paying tribute to the musical world that shaped them. After devoting their 2009 release 11:11 to original compositions that explicitly honored the artists that inspired them – including the disparate likes of Palestinian oud players Le Trio Joubran, electronica musician Jorge Reyes and Pantera shredder Dimebag Darrell – their latest outing finds the Mexican-born guitar duo uniting with an enormous band of Cuban musicians to rework songs that appeared on their prior records. By taking what they already know and approaching it in the most expansive manner possible, combined with a certain amount of generosity in letting the new collaborators put their own markings on established work, Rodrigo Sánchez and Gabriela Quintero make an album that is wildly enlivening.

The group dubbed C.U.B.A. is officially a 13-piece collective, which is made a bit clearer when the name is expanded from its acronym to the full designation of Collection Universal Band Association. It is filled with young, highly skilled Cuban musicians and a few added ringers from around the globe, including sitar player Anoushka Shankar and seasoned heavy metal drummer John Tempesta, who has gigs with White Zombie and the Cult under his belt. Under the guidance of the dueling acoustic guitar virtuosos who get top billing on the album (Sánchez also co-produced along with Peter Asher), this vast group of musicians sounds remarkably cohesive. Despite the strong personalities throughout and the willingness to stretch boundaries, the whole work sounds distinctively like a single whole rather than a multitude all tugging in different directions.

It starts right off with the rapid, almost agitated rhythms of “Santo Domingo,” a song originally written to honor the influence of Dominican Republic pianist Michel Camilo. It bears strong overtones of Latin jazz, though its racing heart suggests the urgency of the hard rock that was the shared first love of Sánchez and Quintero. Fusion is often a word invoked by music fans with the accompaniment of a wrinkled nose that suggests a rising stench in the air, but the album immediately establishes the possible thrill from bringing together a variety of styles and melding them until their unifying qualities come to the forefront. “Santo Domingo” doesn’t make great tonal shifts – it’s recognizably the same song from beginning to end – yet forges its own zipping unpredictability. The musicians can draw from any part of their diverse collective background at any time, and their skills make the music pivot as easily as shifting weight from one foot to the other.

Comprised entirely of instrumentals, Area 52 is a strange, strident sonic wonderland. The songs are lengthy, mirroring in their eddies of sound the discovery process itself. “Ixtapa” moves smoothly back and forth between horn-burst Latin romps and the mystical undulations of elastic Indian folk. “Logos” is sweetly ruminative, while “Diablo Rojo” is jet-propelled, including a couple of breaks of some truly stunning percussion work. It’s easy to imagine the experience of watching the whole outfit playing live as a blissfully exhausting experience.

Impressive as it is, there are times when the album begins to blend together a little too much, the procession of expert work-outs turning into a brilliant, aural blur. It sometimes pushes out too forcefully at the very points when it would be useful for the album to lean back a little and try to draw the listener in. Rodrigo Y Gabriela are obviously skilled performers and they’ve made certain that their first major collaboration with others has drawn in great players who can keep up and, in the album’s very best moments, even test their own endurance. If the album is sometimes burdened with too much drive, too much ambition, that’s hardly the worst problem to have.