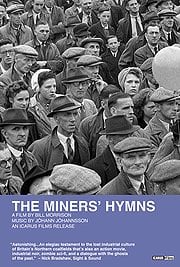 [xrr rating=4.25/5]The delivery system for a film is generally pretty simple: it’s shot, the image captured and stored, then projected onto a screen of some sort. With Bill Morrison’s experimental efforts, the process gets a little more complicated, with the director’s trademark use of old stock footage, new soundtracks and physically altered film all becoming clues in a kind of super-textual guessing game, one that’s more about context and montage than actual content. If the average film’s story is the journey of a series of images moving from A to B, Morrison’s are more of a Mobius strip, strings of images involved in constant commentary upon themselves.

It’s a style that’s summed up by 2005’s Outerborough, one of the three shorts filling out the program for Film Forum’s premiere of The Miners’ Hymns. Outerborough is deceptively simple, a roughly 30 second depiction of a train’s journey across the Brooklyn bridge, filmed in 1899. In fact, it’s hard to tell exactly how long the clip is, since Morrison presents it at varying speeds, beginning with a slow crawl that speeds up gradually, echoing the chugging procession of the train, until the entire thing is a blur. Things are further complicated by the fact that the image is doubled in split-screen, so that the film plays forward on one side, in reverse on the other. It’s clear that the image on the screen is only one part of what’s being presented, almost paling in comparison with the effect that external factors – speed, placement, background – have on the viewing experience.

It’s dense, heady stuff, but Morrison’s films work because they aren’t cold technical exercises. He has a clear fascination with the dark corners of film history, drawing his source material from the industrial movies, test reels and early records that were intended as practice or for some specific, unglamorous purpose, never meant to be seen by a wide audience. Some of these are more than 100 years old, and their subsequent imprisonment – being filed away on shelves or slowly rotting in storage – is a continuing focus in his work.

Such images were at the heart of his brilliant Decasia, which depicted the beautiful decay suffered by old silver nitrate prints, turning their scarred footage into a spinning dance of rot and ruin. The same love for castoffs is seen here in 1996’s The Film of Her, which employs a mix of voiceover and stock footage to chronicle a fictional man’s obsession with finding a strip of celluloid he glimpsed briefly in his childhood, creating the field of film preservation in the process.

That love is still apparent in the main feature, but it often feels a little buried, ensconced inside a film that’s more readily concerned with social anthropology. The Miners’ Hymns is a simpler, more direct effort, with the plight and eventual extinction of English miners communicated through old footage of them living and working, across scenes that range from work to play to protest. At a basic level, it seems like a straightforward portrayal; we see the workers in all aspects of their lives, and times moves in relatively chronological manner. But the film’s two aerial shots, sweeping approaches that sit at its beginning and end, do more than just provide context, pointing out the physical setting for all of this historically immersed material.

They move slowly across the countryside, taking in the greens and browns of rural England, and, with the help of a few onscreen notes, point out where the mines used to be. They’re other things now, from processing plants to blocks of stores, surrounded by neatly arrayed housing developments. The film then exists in two discrete halves, one colorful and boundless, the other grainy and earthbound, and in this dichotomy we see both the past and the present, along with the persistent sense that we couldn’t have one without the other.

Like the shorts that accompany it, The Miners’ Hymns is often puzzling and staunchly difficult, telling a story without the help of narration, plot or dialogue, a stubbornly silent film with a murky message and purpose. But it’s inevitably a rewarding experience, and in the end fits in line with the pure physical beauty of Morrison’s previous films. The biggest issue here remains Jóhann Jóhannson’s score, which is often oppressive in its literal reading of the action onscreen. The importance of music is apparent in Morrison’s structuralist approach, and a delicate film like this would benefit from subtlety in that regard. But the music leans too heavily on a bombastic brass band style which, while redolent of the silent-era footage on display, feels loud and clumsy. It’s atypical in a film which otherwise feels entirely in control of its presentation.