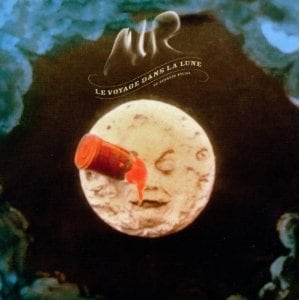 [xrr rating=3.5/5]Starting with rolling timpani deployed over a languid rhythm, injections of atmospheric, static-laden guitar and busy orchestral flourishes that pop up like pockets of space debris, veteran electronic duo Air’s Le Voyage Dans la Lune gets off to a familiar, if unremarkable, start. Granted, “Astronomic Club” is not much like “La Femme D’Argent” or even the Space Age dancehall jam “Venus” (kick-offs to their 1998 debut, the iconic Moon Safari, and 2004’s Talkie-Walkie, respectively), but in low-frequency noise and garbled sampling possesses a sort of understated cosmic charm. As is the rest of Le Voyage, the track is both buoyed by and tied up in indelible symbiosis with the source of its inspiration: Georges Méliès’ 1902 short film of the same name, to which Air’s Le Voyage was composed as a companion when a long-lost hand-colorized print of the pioneering cinematic narrative about six astronomers traveling to the moon was restored in 2010. (The restoration, with its new score, premiered at last year’s Cannes.) “Astronomic Club” never quite makes a solid landing though – clocking in at only three minutes and change, it’s too insubstantial to even form strong opinions of – a criticism that could also be leveled at the album as a whole, given its paltry 31-minute running time and somewhat lackluster delivery.

But this is not to say Le Voyage isn’t without its share of highlights. Members Jean-Benoit Dunckel and Nicolas Godin are nothing if not dynamic musicians, and the album, befitting the adventurous arc and tone of its companion film, goes through a few neat iterations: the fast-paced “Parade” which slams through bird nests and erupts in 8-bit adornments, Mellotron, choral arrangements and sparse, spacey accompaniment on guitar set against hyperactive hi-hat stutters and cymbal splashes, is a welcome change-up to the record’s otherwise subdued sound. Similarly, the gently thrumming lead-off single “Seven Stars,” featuring guest vocals from Victoria Legrand of dream-poppers Beach House, at first hums with quickened percussion and low piano tones, ringing and clanging like a capsule undergoing massive G-force pressure before achieving escape velocity in ascending guitar runs and breaking into an exosphere of synth and intertwined vocal layering, pounding heartbeats underlining its breathlessness. Its dark drama has an understandably murky element to it, akin to that of Legrand’s band or even the dim, vintage feel of Méliès’ impressionistic film, even while its excitability bears greatest resemblance to 2001’s prickly 10,000 Hz Legend.

To less of a degree, tracks like “Moon Fever” and “Sonic Armada” make their mark as well. The former echoes Talkie Walkie’s (and the Lost in Translation soundtrack’s) “Lost in Kyoto” in its bare warmth, wrapped as it is around a single calmingly repetitive riff on piano, whereas the latter sets Mellotron, synth and bass at odds with expressive strums of electric sitar and digitally altered animal cries intended to match the explorer-astronomers’ first encounter in the film with the Selenites, the moon’s green-skinned natives (the presence of whom might complicate a certain presidential candidate’s plans to colonize the itinerant satellite). “Cosmic Trip” manifests in dripping tones and a persistent percussive rhythm that has the effect, together with noise crowding in from all vectors and drawn-out vocal samples, of creating a crushing, spectral feel not far from the kind on display on Air’s The Virgin Suicides soundtrack, or some form of Big Bang in reverse – the theoretical Big Crunch. Breezy closer “Lava,” with a wall of wailing synth and choral “ahs” following some work on banjo and the type of heady, fuzz-heavy instrumentation listeners will find most familiar, is also a return to the more freewheeling form recently lacking in the band’s discography.

By contrast, “Retour Sur Terre,” “Homme Lune” “Décollage,” three interstitials, as well as “Who Am I Now” fall mostly flat, or at least come across as thin and infrequently substantive, even in spite of (on the lattermost track) guest turns from the members of dream-pop outfit Au Revoir Simone, and the track’s attractive, watery-piano-and-windchimes aesthetic. The contributions from Legrand and Au Revoir Simone aren’t surprising, given the sizable debt owed to Air by its fellow somnolence-peddlers after nearly two decades of producing dreamy, sexy suites that successfully incorporate everything from early British electronica to American lounge to French pop from the 1960’s. But by record’s end Le Voyage Dans la Lune seems a better twin to Méliès’ film than a standalone release. This is slightly problematic for Air, who as a group have been largely unable to capture the ephemeral cool of their earlier output, despite confident if scattered reinventions on 2007’s Pocket Symphony and 2009’s Love 2. And the fact several of the tracks on Le Voyage hearken back to past releases may also indicate a reticence to experiment too seriously. Anchored by the aesthetic limitations of the film, the album’s truncated length and a slight reluctance to travel too far afield from the comforts of their home planet, Air may wish to aim for more distant – and sizable – cosmic bodies next time around.