Ah, Inception. Every Dark Knight fanboy’s favorite head-trip action-fantasy, with a cast only someone with the bona fides of Christopher Nolan could muster: fugitive dream-invader-thief Cobb (Leonardo DiCaprio), accused of murdering his wife (Marion Cotillard) and offered a path to freedom by corporate magnate Saito (Ken Watanabe), teams up with hard-nosed manager Arthur (Joseph Gordon-Levitt), snarky forger Eames (Tom Hardy), the young Ariadne (Ellen Page), able to construct patient, complex labyrinths to transpose into others’ dreams, and chemist Yusuf (Dileep Rao) for one last heist, after which Cobb will be able to return to his family, charges dropped. All they have to do, he is told, is potentially descend a dream-layer or two within the subconscious mind of energy heir Robert Fischer (Cillian Murphy) to plant an idea in his brain while simultaneously fending off aggressive manifestations of Fischer’s will and the occasional disturbance caused by Cobb’s own inner projections of his deceased spouse. Simple, huh? For those who find themselves confused by the plot, don’t worry – Inception comes with a little bit (okay, an entire hour’s worth) of expository dialogue. 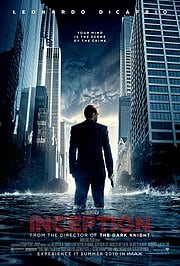 Although the complexity of the real world and what’s in it (such as automatic firearms, skyscrapers and computers) is such that no countable number of human beings could ever, in full and accurate detail, possibly reproduce it in true verisimilitude (nor even perceive all the details all at once, given the spotlight-narrow fashion in which consciousness focuses itself), this is a reality that, like reality itself, Inception seeks to deny, instead giving over to Ariadne and other “architects” the essential ability to construct fully-formed and fleshed-out worlds. What’s more, per the film’s logic, these architects of dreams may only invent details and touches gleaned from pure inspiration or take very tiny pieces from reality, rather than create from memory or borrow wholesale from the real world, a nonsensical requirement that falls apart if one considers how what we call invention is mere reconstitution: detail reducible to further details, “inspiration” just another name for notions that previously existed but had perhaps not yet come to our attention at the right time or in the right numbers and which, scaled up, constitute reality itself. This is not Inception’s only, nor largest, oversight. Overall, the impression the film communicates is that its twists and turns carry greater weight than its plot and characters combined.

The end result, for all the lavish praise heaped on it upon its release in 2010, besides being muddled by incessant gimmicky tricks and CGI, is something that largely values form over content and style over substance, like several different action-thrillers and a decent core idea thrown into a blender and set on “pulse.” Or maybe it’s a combination Spielberg and Gondry film with none of the heart, twice the pretentious ambition and half the inventiveness. When the team takes the plunge into the waking world of a dreamer’s mind, assumedly the film’s centerpiece, they land in clear-cut, gritty dreams-in-dreams(-in-dreams) that rattle like first-person shooters rather than hum like impressionistic fugues, the true mindscapes of the subconscious. And when Inception falls readily into a mode of exposition-within-exposition-within-exposition, it even borders on self-parody, as when Ariadne inquires, about to make the jump into the second nested dream, “So, whose subconscious are we going into, exactly?” If a projection played by Rick Moranis were to turn to the camera and say, “Everybody got that?,” it would have strangely fit.

Of course, Inception isn’t lacking in occasionally inspired moments, such as the extended hallway scenes featuring Gordon-Levitt on wires, which are absolutely, almost death-defyingly impressive, and a number of glorious slow motion sequences. But significant gaps, such as why those hoping to defend against extraction and inception would “militarize” their subconscious projections and equip them with assault rifles rather than outright replace them with, say, Sith Lords riding dinosaurs, are beyond me. Given its past and current popularity, Inception is somewhat of a mess and highly overrated, however pretty it may look at times. The architectural folly is a good analog for the film, given its charmingly decorative extravagance and yet essentially dysfunctional execution. The image of the infinite staircase, repeated twice in the film, is equally apt. Inception is just like Escher’s stairwell: steps can be taken hurriedly or with care and aplomb, but either way it goes nowhere. While the film, in the words of its protagonist, might reach for “an idea that is fully formed, fully understood… that sticks,” the outcome involves none of the above.