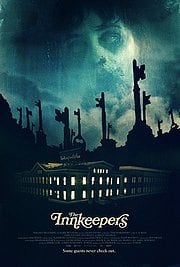 [xrr rating=3.25/5]Ti West is out of step with the times. The director specializes in horror films but he seemingly has no interest in reviving a splatterific franchise for a new generation, nor does he want to test the endurance of the audience with kinetic excesses of escalating violence. Certainly the idea of tossing off a bland “found footage” stunt must be entirely anathema to him given the meticulously cinematic approach he brings to his visuals. Instead, all evidence suggests that he longs for a time before Leatherface grabbed his first Black and Decker, when subtlety could be the prevailing tone of a movie fright-fest.

The clear preference for scariness over shock was evident in West’s breakthrough film, The House of the Devil, which was deliberately, defiantly slow. The movie didn’t race; it lingered, edging through the domicile of the title, every corner of it seeming unbearably menacing. There was a hefty, razor sharp blade hanging over the whole proceeding, and the promise that it was going to drop was as horrifying as any amount of blood that would eventually be spilled.

West brings the same approach to his new film, The Innkeepers, which is based on and indeed set in the ancient Connecticut hotel where the filmmaker and much of his crew stayed when making Devil. As West tells it, countless residents of the community were certain that the old place was haunted, a belief I’m sure they were especially excited to share with the out-of-towners who just so happened to be in the area to make a horror movie. Eventually the abundance of troubling tales got everyone spooked, an experience that West reconceived into a screenplay about a pair of employees getting increasingly unsettled as they preside over the final weekend of a vast, nearly empty old inn right before it closes for good.

Luke (Pat Healy) and Claire (Sara Paxton) are the two front desk workers who spend their spare time prowling the hallways and ballrooms with a bulky tape recorder listening for the real version of the proverbial bump in the night. Initially it seems that Luke is the only who seems to be driving this expedition into the unknown and Claire indulges him, but she slowly gets drawn deeper into it as the creepy history of the hotel starts spectrally poking at her when she’s alone in the shadows. West is committed to building dread in these scenes, sliding his camera alongside his heroine like a trusty friend or, conversely, an evil fiend who’s getting close enough to gasp one hot breath onto her neck before exacting some deluded retribution. Beyond that, though, West is interested in showing the ways that doubt, worry and then outright panic can insinuate themselves in someone who has too much time alone with their own haunted thoughts.

The Innkeepers isn’t entirely a cerebral exercise. Scary things do start inching out of the long shadows, although West does structure the film in such a way that allows for a touch of ambiguity to the veracity of the blood-smeared souls that wander the night. There’s also a welcome sense of humor to the film, a spirit of playfulness that mostly keeps the energy high. Much of that can be attributed to Paxton, whose prior career is largely comprised of playing glamorous beauties in truly terrible movies (Sydney White, anyone? No?). Here she opts for a charmingly awkward performance marked by goofball twitchiness and social graces roughly akin to clanging pans.

In some ways, the film isn’t as assured as West’s best work. There are some elements that are perhaps there to fill out the characters or even serve as red herrings but instead ultimately come across as questionable digressions. When a filmmaker is as thorough and focused as West, every bit that doesn’t contribute seamlessly raises questions. It may seem overly picky to cite these blips as problems, but The Innkeepers does suggest, after all, that minor issues can grow with dangerous speed into all-consuming mental mayhem that knocks everything out of whack.