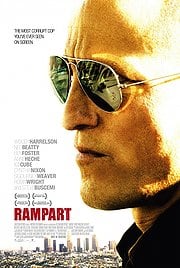 [xrr rating=3.25/5]Rampart begins with a tight close-up of Woody Harrleson’s profile as he maneuvers his police car around Los Angeles. Director Oren Moverman keeps the camera close to his star’s face, making it nearly impossible to see anything else in the frame. We can see Harrelson’s angular jaw line, his receding blonde hair cut short. A mole stands out amongst the light stubble on his cheeks. It’s an appropriate prologue since Harrelson occupies almost every frame of the film, providing a warts-and-all performance of a corrupt cop who slowly realizes he is totally fucked.

Harrelson plays LAPD officer Dave Brown, a fast-talking, womanizing, arrogant sonofabitch who has weaseled his way out of one imbroglio after another. Set in 1999 in a city still reeling from the echoes of the riots stemming from police misconduct, Rampart portrays a cop whose time breaking the rules is almost up. Named for the division of the LAPD targeted by charges of corruption, Moverman’s film (co-written by crime novelist James Ellroy) examines the microcosm of one corrupt cop standing in for the stench of an entire rotten department.

Harrelson sinks his teeth into the role as the pill-popping and perp-pounding Brown. Whenever his back is against the wall, Brown breaks out well-honed lines of defense ranging from victimhood to PTSD stemming from his time in Vietnam. Brown is a control freak, breaking into rages when his bar conquests and estranged family don’t do what he commands. And what a fucked up family situation the man has: he splits his time in two adjacent houses with two sisters (both are his ex-wives) and the daughters he has with each of them.

While the situation is strained at home for Brown, things aren’t any better in the dating world. He gets involved with a district attorney (Robin Wright), creating a relationship that is destructive for them both. At work, he is hounded by an Internal Affairs agent (Ice Cube) who has the goods on a murder/robbery that will finally take Brown down for good. We watch as Brown’s world crumbles, complete with a Faustian, drug-fueled trip to a sex club that shows the man at the nadir of his existence. Compelling, yes, but not for the faint of heart.

Rampart does suffer from the cavalcade of famous co-stars that pop up in every scene, ranging from Sigourney Weaver to Anne Heche to Ned Beatty. With a new famous face such as Steve Buscemi or Ben Foster appearing throughout, it soon becomes a game of spot-the-celeb, a decision that is jarring and ultimately takes away from this fraught character study. Maybe these actors were so impressed with The Messenger that they are lining up to work with Moverman (much like Malick in The Thin Red Line), but it sells the film short.

Other actors aside, Harrelson proves his worth yet again in this tough role. While excellent in comedy (Zombieland), Harrelson delivers a haunted and harrowing performance as a man who finally realizes the jig is up. We see this awareness slowly creep in as he self-destructs throughout the film’s runtime. Is it willful? Is he finally giving up? Everyone hates Dave Brown, but no one hates him more than himself.