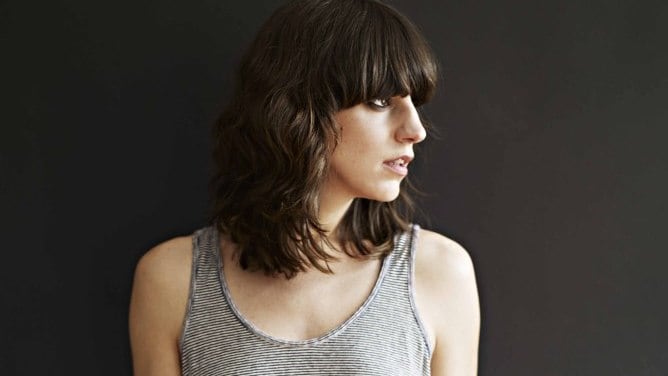 At a quarter past 10, before a thinly populated but receptive mid-winter Portland crowd, the Fiery Furnaces’ Eleanor Friedberger and her solo effort’s backing band (MGMT’s Matt Asti on bass, Ahmed Gallab on percussion and John Eatherly on lead guitar) coalesced gradually around the stage, Friedberger hanging a pastel green Fender over her left shoulder and tweaking monitor levels as pockets of enthusiasts formed clumps up front. With only slight fanfare the quartet launched into a more open and energetic version of “My Mistakes,” the first of a few significant highlights from last year’s understated Last Summer. Played looser, noisier and lacking acoustic sparkle and the pop of keys, it was half-unrecognizable, up to and including the extended runs on guitar during the bridge. Scrubbed of the extraneous, not heavy on the frills (e.g. without the saxophone buffering the recorded version) and delivered plainly, their take on “My Mistakes” was highly correlative with the rest of that evening’s performances.

So while the follow-up to “My Mistakes” was a bit easier, a bit bluesier, with Eleanor taking rhythm duties in a relaxed closed-fret strum, “Heaven” sounded like it was by contrast merely being run through by Friedberger and company, with the exception of occasional bursts of energy and charisma, as pepped-up guitar and percussion on an even keel loaned it a concreteness that even a dispirited performance could not sway. Friedberger’s guitar casting light back at the crowd, the band adopted the motto, “No time to sit still,” first present in lyrics for new track “I’ll Never Be Happy again,” a momentous roller of a song wrapped by the band in surf-rock picking and slapped on top of undulating percussion, choosing, per their dedicated focus, to segue directly into Last Summer star “Roosevelt Island.” But that particular tune’s deep rhythms on bass, constant snare shots and hi-hat riding, colluding with guitar arpeggios to produce a poppy, lightly disco-fied Todd Rundgren-style busyness, were also somewhat stymied by Friedberger’s no–nonsense approach live, even for all the song’s in-built excitability. Moreover, entries in the middle portion of their set were occasionally dimmer and scratchier, if not also less remarkable on the whole for being so, having been introduced matter-of-factly by Friedberger and again sped through with little to no discretion or flair, with a languid version of new track and slow ballad “There Are Other Boys Too” breaking the spell of the seeming race to the end of the night.

Though Friedberger and friends attempted to right the ship late in the concert, the result was of mixed efficacy. While Eatherly’s guitar work was singularly admirable on “I Get Lost,” Asti and Gallab remained focused and reactive through the whole show and the group’s ability to get the crowd engaged or even swaying improved as the evening progressed, it wasn’t quite enough to prevent a lackluster conclusion to the concert – and all of this coming in spite of strong, nuanced and emotive vocal turns from Friedberger herself throughout. Both “Inn of the Seventh Ray” and “I Won’t Fall Apart on You Tonight” made for faithful translations onstage, but only by the time the band had settled into a more comfortable groove, relaxed and felt more comfortable fooling around onstage did the hidden power of Friedberger’s simple yet criminally short (so short several of them sounded like they had ended before they ever got started) pop constructs become daylighted. Otherwise, like Friedberger’s eyes – frequently covered by dark bangs – all the best elements of that night were buried beneath the external, and subject to occlusion.