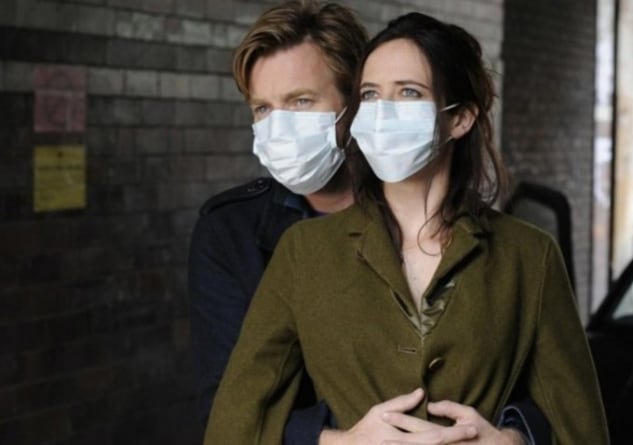 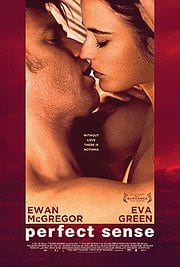 If only Perfect Sense had been a film about a pair of assholes facing the end times together. Instead, the drama is played alongside hopeful scenes of humanity’s ability to adapt during overwhelming crises, forcing comparisons that surely neither director David Mackenzie or screenwriter Kim Fupz Aakeson intended.

After a turgid opening of random images paired with graceless semi-poetic narrative, we are introduced to sexy chef Michael (Ewan McGregor), in bed with a girl he just picked up. He wakes her and kicks her out in the middle of the night, pleading an inability to sleep when she’s near. Elsewhere, unhappy doctor Susan (Eva Green) is sulking over a breakup. Because she has the maturity of a sullen teen, she deals with this breakup by throwing rocks at birds, starting a smoking habit and skipping out on work. When she finally returns to the clinic, she is immediately sent to examine a patient with a mysterious case of anosmia. The patient was overwhelmed by emotion earlier that day, breaking down at sudden memories and regrets. When that subsided, he found he had lost his sense of smell. Dozens all over the world have the same unexplained condition and more are being reported. A narrator (Katy Engels) explains that the disease is severe olfactory syndrome — “S.O.S.” she tells us, slowly, to make sure the audience can understand the complexity of the metaphor.

Michael and Susan meet, their impromptu date interrupted when they both succumb to the same condition. The world seems to go on without much change, however, as society copes and moves on. The next wave of sensory loss is preceded by panic and paranoia, then a moment of extreme hunger, then the loss of taste. The film’s interminable two-minute “moment” of hunger features people eating absolutely everything around them in the most nauseating manner possible, sobering up to discover what any dog who has eaten a sock could have told them: that which can be eaten is not necessarily food. Director Mackenzie is so smitten with this idea that it appears later in the film after Susan and Michael have become lovers and, in an allegedly playful moment, feed each other shaving cream. You know, for kicks.

In an attempt to make the epidemic appear international in scope, stills and film clips of both staged and stock footage are used during multiple montages. It’s questionable whether the news footage of real people being hurt is appropriate, especially in a film that cares so very seriously about whether people will still go to fancy restaurants when the end of the world is nigh; unkind comparisons to Douglas Adams’ Hitchhiker trilogy are inevitable. At any rate, the news footage certainly doesn’t lend realism to the film. Between the ham-handed attempt at allegory through unnecessary narration and a cinematographic aesthetic that overwhelms with blue-gray filters, self-conscious tricks of the lens and harsh overlit backgrounds, it’s obvious the film is meant as parable. However, seeing a news clip we recognize takes us out of the fable Mackenzie has ostensibly spent so much time to create.

The third sense to vanish is hearing, which is when society finally breaks down; coincidentally, this is when the tenuous hold the film has on the audience completely breaks down as well. Loss of hearing is preceded in victims by a fit of violent anger, yet society at first acclimates to this new normal as they had acclimated before. However, despite modern computers and phones being shown in the film prior to this, neither texting, emailing, nor the assistive technology which already exists for the hearing impaired is mentioned. In what is supposed to be a tragic turn, Michael attempts to contact Susan via voice mail and by yelling at her apartment windows despite knowing everyone has lost their hearing. It is silly rather than tragic, and one can only guess, in lieu of any explanation in the film, that the intended message is that machines cannot provide the personal closeness humanity needs to survive.

Susan is deliberately ignoring Michael, anyway. Their relationship had developed as the illness spread, both of them attempting to overcome personal issues and fears. The pair eventually connected emotionally, their bond evolving into genuine closeness as the world crumbled about them. Then Michael was suddenly hit with the third wave of the epidemic. His brief spate of anger manifested in personal attacks on Susan who was deeply hurt, and their bond was broken. But she is a doctor and she knows the signs of illness. Even if too traumatized to recognize the symptoms in Michael when it happened, she surely should have realized it later but never does, not even after her own moment of anger before losing her hearing. In a sulk, she scribbles a note to her sister saying she was right about Michael all along: he was an asshole.

Susan and Michael are both assholes, something they readily admit, but this distances the audience from their plight in a fatal way. The film rarely concerns itself with the disease proper, and even Susan, ostensibly an epidemiologist searching for a cure, is almost never at work. Instead the focus is on the love story, but it is difficult to connect with this couple as they’re sour, completely without chemistry. Their admitted past shows them unable to cope appropriately with medical crises. Contrasting them with the background characters who can cope and overcome is an interesting concept, yet neither Michael nor Susan learn from watching those distant others or from being forced to deal with the crisis. Once the disease hits, their actions are consistently ascribed by both narration and plot as accidents of illness. Love can hardly be said to conquer all when we are told that the forgiveness and joy we are witnessing is merely the incidental byproduct of humanity’s final disease.